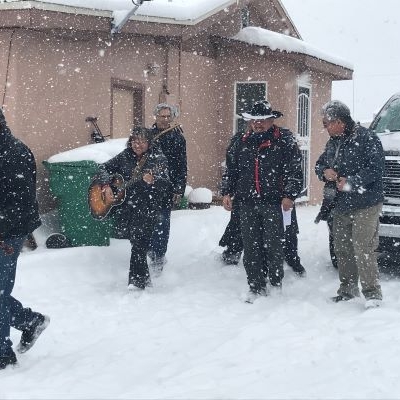 
New Mexico’s musical and dramatic traditions that are celebrated during the holiday season developed over hundreds of years beginning with traditions in medieval Spain that were then brought to the colonies. Here in New Mexico each has developed with local and regional influences. The Matachines dances are performed by the Hispano, Pueblo and Genízaro people of New Mexico. Throughout the state the Matachines dances and ceremonies are enjoyed on December 12, Feast Day of Our Immaculate Conception and Our Lady of Guadalupe and are also performed in many locations on Christmas Eve or Christmas Day. Las Posadas (The Inns) and Los Pastores (The Shepherds) are performed during the advent period leading up the Christmas Eve and Christmas day. Two traditions ringing in the New Year are the Los Comanches dances in Ranchos de Taos and the celebration of Día de los Manueles (The Day of Immanuel), or Dar los Días (The Giving of Days) in which houses are serenaded with music and dance to welcome the New Year, the latter are accompanied by the symbolic killing of the old year.