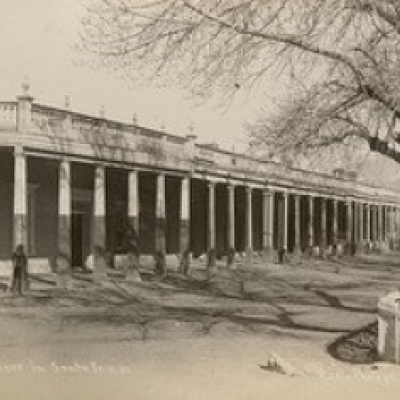 
The talk will provide an overview of the Palace Seen and Unseen exhibit, which integrates documentary records with the material evidence uncovered by more than 100 years of archaeology at the Palace. Through this approach Co-curators, Stephen Post, Cordelia T. Snow, and Alicia Romero guide the visitor through the many changes that occurred to the Palace and its grounds. Historical information is gleaned from governors, priests, prisoners, soldiers, and traders through documents, memoirs, maps, and photographs. Archaeological insights come from excavations within and outside the Palace where stone foundations and buried facilities reflect 350 years of architectural change and the recovery of more than 1,000,000 artifacts connect us to its diverse peoples.

Stephen Post is the former Deputy Director of the New Mexico Office of Archaeological Studies. His 45-year archaeological career spent mostly in New Mexico afforded him the opportunity to study 12,000 years of New Mexico’s past. He directed excavations for the New Mexico History Museum’s Domenici Building and Santa Fe Community Convention Center from 2002-2008. Findings at these locations include evidence of Santa Fe’s earliest farmers, remnants of one of the villages of Ogapogeh, foundations and facilities of 18th and 19th century residential and military compounds, and foundations and basements from one of Santa Fe’s 20th century schools. He was Co-Curator of NMHM’s 2009-2018 Santa Fe Found exhibit with the Palace.