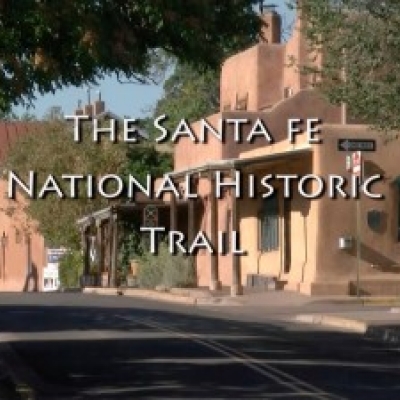 Nov 14, 2021
2:00 PM to 3:30 PM
"The Road to Santa Fe" A Convergence of Cultures
A film presentation to commemorate the 200th anniversary of the Santa Fe Trail
New Mexico History Museum


The history of the Santa Fe Trail provides the focus of a new documentary being distributed to PBS stations throughout the US this Fall. Entitled “The Road to Santa Fe,” this 90-minute program traces the main routes of the trail from Missouri to Santa Fe, spotlighting some of the landmark venues associated with it. Produced to coincide with the bicentennial of the trail, the documentary begins with the departure of a small group of traders from Franklin, Missouri in September of 1821 on the first successful trading expedition to Santa Fe. It proceeds through the six decades of the trail’s active trading life, highlighting the main events and historical characters connected to it. With the assistance of noted historians such as Leo Oliva, a founding member of the Santa Fe Trail Association, and Frances Levine, former director of the New Mexico History Museum who currently serves as president of the Missouri Historical Society, the documentary reflects upon the role of the Santa Fe Trail in the westward expansion of the United States and its impact on the relationship between the US and Mexico. It also explores the impact of the trail on the indigenous inhabitants of the region through which it passed. The documentary includes narrated excerpts from journals written by historical figures who traveled the trail, including William Becknell, George Sibley, Josiah Gregg, Susan Shelby Magoffin and Marian Sloan Russell. The producer of the documentary, Dave Kendall of Prairie Hollow Productions, tells of his family’s connection to the trail as one of his ancestors gained employment as a teamster and subsequently settled on a farm near Council Grove, Kansas, a noted rendezvous site on the trail.