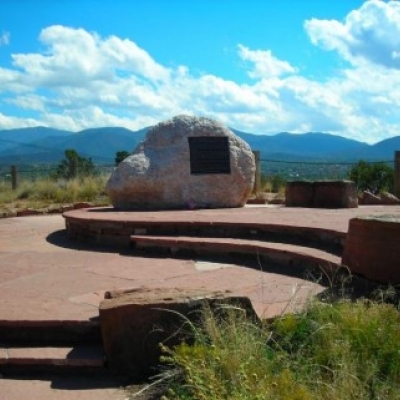 
Located on a hill at the Frank S. Ortiz Park in Santa Fe, NM, stands a stone Marker, placed there April 20, 2002, commemorating the Santa Fe Internment Camp (SFIC). Established in March of 1942, the camp interned over 4,500 Japanese immigrant men, making it one of America’s largest prison camps for resident aliens in the United States during WWII. Please join the New Mexico History Museum (NMHM) and the New Mexico Japanese American Citizens League for an in-person/virtual symposium which will include speakers, theatrical performances by the JACL Players, short films, and panel discussions to commemorate the events and (SFIC) Marker. Speakers aspire to inform and remind attendees of the historical existence of the U.S. Justice Department internment camp on the site of the present Casa Solana neighborhood, and to memorialize the experience of thousands of Japanese immigrants and American-born citizens unjustly incarcerated there between 1942 and 1946, as well as celebrate the courage of the Santa Fe community in the resolution of the Marker controversy. A related three-part exhibition will be on display in the NMHM from April 9 through April 30. The exhibition includes "Generational Legacies: The Santa Fe Internment Camp," "Confinement in the Land of Enchantment," and artifacts from the New Mexico History Museum’s collection.

Dr. Gail Okawa relates her 18 years of research on the journey of her grandfather and other Issei men from Hawaii, along with others who were imprisoned, and how they survived their journey.

“Through Lines—Past into Present: The Contemporary Climate”

Discussing past and present historical parallels and todays growing solidarity among diverse groups striving for human rights are:

Victor Yamada, Project lead, Confinement in the Land of Enchantment

Marker planning committee members recall the intense community opposition to memorializing the camp, due in part to New Mexico’s heavy losses in the Bataan Death March, and the courage of the Santa Fe community in the resolution of the Marker controversy.

JACL Players enact stories inside and outside the barbed wire camps of Lordsburg and Santa Fe—including childhood memories of Santa Fe residents, a former mayor, a retired history teacher, and the son of a camp guard.

*Immediately following the symposium there will be a Pilgrimage to the SFIC Marker site located at: Frank S Ortiz Park, 1474 La Loma Vista, SF, NM, 87501 with a procession and brief ceremony. Please meet at the park at 5:30pm.