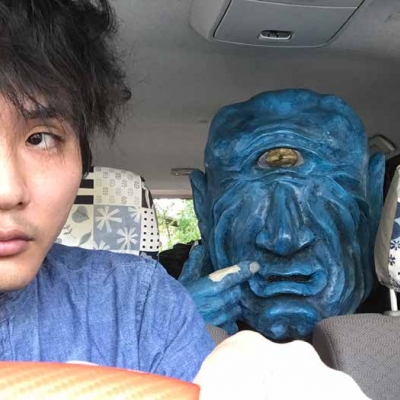 
Junya Kōno is a yōkai scholar and artist. He teaches yōkai tourism as a lecturer in the Department of Tourism Design at Kyoto’s Saga University of the Arts. In 2008, Kōno founded the yōkai student art collective Hyakuyōbako (Box of 100 Yōkai), and has since organized yōkai-themed events in Kyoto, such as Ichijō Hyakki Yagyō, an annual yōkai costume parade that emulates the famous Hyakki Yagyō emaki (Night Parade of One Hundred Demons scroll painting), the Raiden Yōkai Train; and the Mononoke Art Market, a festive market for yōkai arts and crafts. In 2018, Kōno began working as a collaborator on MOIFA’s exhibition, Yokai: Ghosts & Demons of Japan. He involved his students in writing and filming traditional Japanese-style ghost storytelling performances for the exhibition and he played a pivotal role in helping to develop ideas for the exhibition’s obake yashiki (monster house). In 2019, he spent three weeks in Santa Fe creating life-size paper mâche and clay monsters to populate the monster house. Kōno also wrote the chapter, “Yōkai: An Artist’s Perspective,” for the exhibition book, Yōkai: Ghosts, Demons, & Monsters of Japan.

Misaki Yasaka is an artist, a member of the yōkai art collective, Hyakuyōbako (Box of 100 Yōkai), and a recent graduate of Kyoto’s Saga University of the Arts. She collaborates with Kōno to create yōkai-themed events in Kyoto and and performs as a yōkai at haunted spaces. She has exhibited her artwork in Japan and currently in MOIFA’s exhibition, Yokai: Ghosts & Demons of Japan. She is also featured in the exhibition’s immersive Japanese ghost house performing traditional Japanese ghost stories.