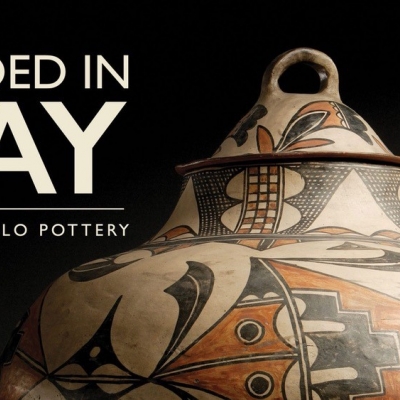 Grounded in Clay: The Spirit of Pueblo Pottery In conjunction with the groundbreaking Grounded in Clay exhibition currently on view at MIAC, New Mexico PBS produced a documentary that takes a deep dive into the relationships between Pueblo people and pottery. Watch the compelling short film and stay for a discussion with Pueblo Pottery Collective members Evone Martinez (San Ildefonso) and Lonnie Vigil (Nambe), who are featured in the film, as well as producer/director Adam Shaening-Pokrasso.

Celebrating Lucy Lewis Join us for a light reception as we celebrate the legacy of famed Acoma potter and matriarch Lucy Lewis. A documentary chronicling Lewis’ life and broad-reaching influence will be shown, while Lewis’ descendants, Dolores Lewis Garcia (Acoma) and Claudia Mitchell (Acoma), demonstrate the pottery-making process.

Our Quiyo: Maria Martinez Charine Gonzales (San Ildefonso) created a short film honoring her great-great-grandmother, the renowned potter Maria Martinez. Join us for a screening of this film alongside a showing of a historic film—created by National Park Service in the 1970s—of Martinez. The screening will be followed by a conversation between Charine Gonzales and her grandmother, renowned potter Barbara Gonzales (San Ildefonso).

Grounded in Clay: The Spirit of Pueblo Pottery was curated by
the Pueblo Pottery Collective and organized by the School for  Advanced Research and Vilcek Foundation.