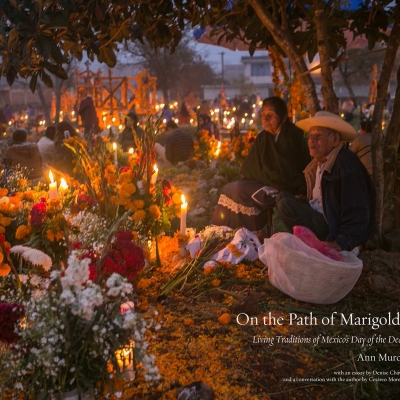 Oct 30, 2022
1:00 PM to 2:00 PM
Book signing with Author and Photographer Ann Murdy of the award-winning book On the Path of Marigolds: Living Traditions of Mexico’s Day of the Dead.
Museum of International Folk Art


Photographer Ann Murdy has been documenting the celebrations around Day of the Dead (Día de los Muertos) in Mexico for more than twenty years. On the Path of Marigolds: Living Traditions of Mexico’s Day of the Dead, is a bilingual book that features nearly 100 photographs illustrating Día de Los Muertos celebrations and remembrances in Huaquechula, Puebla, Teotitlan del Valle, Oaxaca and the communities around Lake Patzcuaro, Michoacan —along with a conversation between her and Cesáro Moreno, Director of Visual Arts and Chief Curator of the National Museum of Mexican Art in Chicago, and an essay by Mexican-American writer Denise Chávez.  As Murdy’s hauntingly beautiful images show, in Mexico death is considered a part of life and something to be celebrated rather than feared. El día de los muertos (which actually lasts two days on November 1–2) is a time to gather with friends and families to feast, pray, dance, and honor the lives of those who have died. From the preparation of the food and flowers to the sanctification of the public and private spaces, to the ceremony itself, Murdy captures the spirit, beauty, and magic of this sacred observance.