Though the source of the Segesser Hide Paintings is obscure, their significance cannot be clearer: the hides are rare examples of the earliest known depictions of colonial life in the United States. Moreover, the tanned and smoothed hides carry the very faces of men whose descendants live in New Mexico today...

Treasures of Devotion/Tesoros de Devoción contains bultos, retablos, and crucifijos dating from the late 1700s to 1900 which illustrate the distinctive tradition of santo making in New Mexico introduced by settlers from Mexico.

Now 400 years old, Santa Fe was once an infant city on the remote frontier.  Santa Fe Found: Fragments of Time, on long-term exhibit in the Palace of the Governors, explores the archaeological evidence and historical documentation of the City Different before the Spanish arrived, as well as at the settling of the first colony in San Gabriel del Yungue, the founding of Santa Fe and its first 100 years as New Mexico’s first capital.

In an age when every cell phone can take a respectable picture, cameras as low-tech as an oatmeal box still beguile a legion of practitioners, both artistic and documentarian. With roots in the ancient discovery of the camera obscura, pinhole photography has enchanted artists from the 1880s through today. Opening April 27 through Jan. 10, 2016, Poetics of Light: Pinhole Photography, in the Herzstein Gallery of the New Mexico History Museum, explores a historical art form that exemplifies thoroughly contemporary ideals: Do-it-yourself handmade technology with a dash of steampunk style.

Museums often focus on how we worked, how we fought, the businesses we built, and the challenges we overcame – the adult side of life. But before we became hard workers, everyone was a child, and every child shaped his or her play-world with toys. From the homemade or passed down to those bought new, toys deeply impact how we fill our childhood worlds. The History Museum collections contain a range of examples of how we played, and in observance of our fifth anniversary, we’ll display some of the most exquisite pieces in an installation in our front window. Toys and Games: A New Mexico Childhood invites visitors to travel down memory lane while also introducing today’s children to the delights of childhood past. 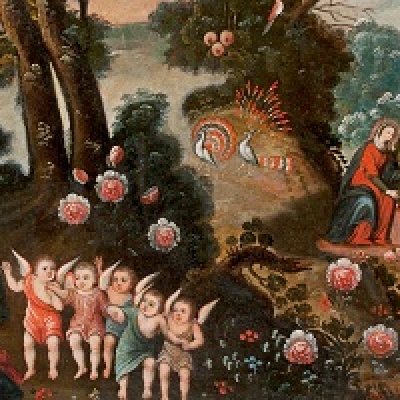 A 1960s’ ecclesiastical wave of urban renewal inspired mission churches throughout the Americas to undergo renovations and, all too often, cast off centuries-old artwork. Charles W. Collier, a cultural attaché to Bolivia, and his wife, Nina Perera Collier, began purchasing and obtaining pieces that eventually formed the backbone of the International Institute of Iberian Colonial Art, once based at their Los Luceros estate in northern New Mexico. In 2005, with the promised construction of spacious galleries and a state-of-the-art collections vault at the New Mexico History Museum, the Institute donated 70 paintings and three sculptures. When Painting the Divine: Images of Mary in the New World opens on June 29, 2014, 35 of these 17th- and 18th-century masterpieces will share one exhibition space for the first time ever.

Painting the Divine includes works from Spain’s three colonial capitals: Peru, Mexico and New Mexico. Together, they reveal how faith sustained Spanish colonists in harsh and remote frontiers and how their religious art evolved in those places.

Gustave Baumann is one of the most recognized and beloved names associated with the Santa Fe art world in the 20th century. For more than five decades, beginning in 1918, the internationally renowned printmaker cultivated friendships with other artists that were full of colorful, artistic, humorous and small-town flavor—all of it brought to life in holiday greeting cards they made for one another. With guileless good humor and steady craft, the cards captured the personal lives and preoccupations that encapsulate the memories and spirit of their times.

In Gustave Baumann and Friends: Artist Cards from Holidays Past, opening November 7, Tom Leech, director of the Palace Press, and guest curator Jean Moss pull from a cache of more than 400 cards donated to the New Mexico History Museum in 2012 by the Ann Baumann Trust. Buttressing the collection are loans from private collectors and the New Mexico Museum of Art. Besides “Gus” Baumann, the exhibit features examples by such New Mexico favorites as Paul Horgan; Olive Rush; Willard Clark; Barbara Latham; Joseph Imhof; Louis Ewing; Will Shuster; Chuzo Tamotzu; B.J.O. Nordfeldt; Ernest and Helen Blumenschein; John Sloan; and Tom Lea. The cards are held at the museum’s Fray Angélico Chávez History Library.

The Museum of New Mexico Press is publishing a companion book on Oct. 15. Leech will produce a limited-edition Palace Press version of it, using Baumann’s original blocks and paper found in the artist’s Santa Fe studio after his death in 1971.

Civil War battles raged across America’s northern and southern states as Texas Confederates launched a plot: Head north and west through the New Mexico Territory with hopes of seizing California’s goldfields and sea ports. In 1862, battles erupted in Mesilla, Valverde, and Glorieta. Confederate forces briefly occupied the Palace of the Governors. Despite such victories, breaks in supply chains forced the Texans to retreat.

While the carnage of Shiloh, Manassas and Gettysburg roiled the nation, New Mexico’s role in the Civil War faded—like the photographs of soldiers and loved ones held for remembrance as a nation faltered and the dead were buried. What was left behind—cased-image portraits of wartime soldiers and their families; a tattered flag; post-war lithographs—failed to definitively answer our nation’s questions, leaving mysteries, unknown faces and untold stories.

In the museum’s intimate Mezzanine Gallery, three curators—Meredith Davidson, Daniel Kosharek and Tom Leech—come together, approaching the subject from different angles and inviting visitors to consider these fragments of memories and how a long-gone war still defines us as Americans.

One of the staples of desert life is the presence—or scarcity—of water. Its importance can be seen across eastern New Mexico, where the Pecos River strives to quench a fragile, 926-mile riparian environment. Along the Pecos, a collage of photographs and sounds, opens June 19, 2015 on the second floor of the New Mexico History Museum. Developed by photographer Jennifer Schlesinger and the late composer Steven M. Miller, the materials were recently donated to the Palace of the Governors Photo Archives, whose Photo Legacy Project collects the work of contemporary photographers.