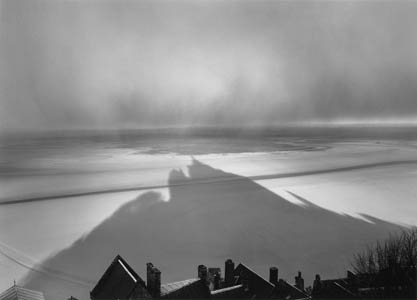 The New Mexico Museum of Art is pleased to present this one-man exhibition by master photographer William Clift, a long-time Santa Fe resident. The exhibition opens April 19 and runs through September 8, 2013.

For almost four decades, Clift has photographed two monolithic sites that dominate their expansive landscapes: Shiprock, an eroded volcanic form that rises above the northwestern New Mexico desert and is sacred to the Navajo (Diné), and Mont St. Michel, a tidal island off the north coast of France that is famous for its Romanesque-Gothic church and monastery. In this selection of more than seventy beautiful photographs, Clift shares his ongoing, nuanced exploration of the two places.

“These are pictures of tremendous sensitivity and resonance,” said Katherine Ware, Curator of Photography at the museum. “The artist’s devoted pursuit of these two subjects from 1973 to the present demonstrates the kind of seeing that is possible with sustained concentration. It’s very different from how most photographers work today.”

The artist has long been recognized for his photographs of the New Mexico landscape but his work defies easy categorization. Born in Boston in 1944, Clift began making photographs at the age of ten with an early interest in Polaroid image making. As a teenager, he took a photography workshop with Paul Caponigro and was soon affiliated with many of the established practitioners of the medium. He moved to New Mexico in 1971, where he and his wife raised a family, and has earned a reputation as a thoughtful photographer and a meticulous printer. He is represented in the museum’s collection by twenty-four prints from across his career.

Regarding the exhibition, Ware said, “These photographs aren’t meant to catalog or document Shiprock and Mont St. Michel but are about the experience of being there. They capture the beauty as well as the danger of these archetypal sites in an evocative manner. The artist doesn’t add it all up for us -- what animates them is how we experience them as individual viewers.”

The exhibition is accompanied by a book with more than 130 reproductions of the artist’s Shiprock and Mont St. Michel pictures. Copies are available for purchase in the Museum Shop and from the artist’s website (http://www.williamclift.com/).

The traveling exhibition is organized by the Phoenix Art Museum, where it will premiere on January 9, 2013.  Mont St. Michel and Shiprock: Photographs by William Clift is presented through the generosity of donors to the New Mexico Museum of Art’s Director’s Leadership Fund and Exhibitions Development Fund.