Santa Fe, NM —The New Mexico Museum of Art presents Alternative Spaces, February 20, 2009 through May 3, 2009, a challenging exhibition that runs counter to the conventional display of artwork in a museum setting. The eight artists in Alternative Spaces will take over various locations in the museum and instill them with their own meaning.

Alternative Spaces is a (mostly) galleryless exhibition that presents contemporary installations in dialogue with the museum’s historic architecture. Eight New Mexico artists will create works in the museum’s architectural nooks and crannies and public spaces not typically used for the display of artwork, including St. Francis Auditorium, the lobby and its fireplace, stairwells, and the façade.

Since 1917, when the Pueblo Revival building was constructed as the state art museum, it has been celebrated as an architectural landmark. One aim of installation art is to dissolve the barrier between viewer and art, and Alternative Spaces invites contemporary artists to transform the visitor’s experience of the museum’s architectural features through the dynamic and unexpected juxtaposition of past and present. The eight artists whose installations will integrate with these spaces are Cathy Aten, Ligia Bouton, Madelin Coit, Angela Elmendorf, Joanne Lefrak, John Tinker, Jared Antonio-Justo Trujillo, and Colin Zaug.

Tinker’s work will be on the west wall of the central courtyard. He will create out of hydrostone (a mixture of plaster and concrete) 38 individually cast and painted abstract flying "insects" that will occupy approximately 33 feet. Tinker has modeled his insect on the small purplish gray Asian moth called Iridopsis Humaria, which only comes alive in the winter (like the exhibition). Each moth measures 2 ½  inches wide, by 2 inches high, by 1/2 inch deep. In placing this installation in an outdoor space that often serves as a gathering place, Tinker has in a sense given the courtyard over to a different sort of gathering.

The Museum’s lobby fireplace will receive the attention of Cathy Aten. Aten is keen on breaking the barrier of “observer and observed” found in the predictable gallery spaces in a fine arts museum. Using wood, steel, and light, Aten said of her piece; “I chose the lobby fireplace to create a reflection of what actually happens there. The elements air, matter and fire meet and a particular landscape is created; alive and ephemeral, leaving us at the same time satisfied and not. The task I have set for myself is to peel away anything in my thoughts or execution that does not NEED to be there, with the desire that what is left is pure and essential to the experience I wish to evoke in the viewer. The aforementioned equation is widened here to include viewer+viewed+experience=art.”

For Altered Spaces, Ligia Bouton takes on Gustave Baumann as a “site” within the New Mexico Museum of Art. In contrast to the more traditional concept of a geographic site, Baumann’s involvement in the early development of the Museum makes him an interesting historical and figurative site to interact with in the context of this exhibition. The resulting installation incorporates furniture made by Baumann with intricate puppet figures made by Bouton that echo Baumann’s marionettes. With the help of projected digital video, these characters come to life to enact their frustrations, boredom, and fears while they wait backstage for the return of Baumann. The piece draws on Baumann’s woodcut print “The Marionettes Backstage” (ca. 1935) in which the lifeless puppets wait for their creator to animate them. This video and sculptural installation draws inspiration from Beckett’s play “Waiting for Godot,” in which the characters wait endlessly for someone the audience quickly realizes will never appear. As with Vladimir and Estragon, the puppets in Bouton’s installation are held in a constant state of arrested motion while they express their longing for Baumann to return.

Colin Zaug will place translucent white stars, 1 to 3 feet in diameter across the Museum’s façade in a project called Constellation. The stars will go around the balcony and southeast bell tower of St. Francis Auditorium, down toward the Museum’s main entrance. The stars will randomly strobe – during the day the effect is a subtle flickering behind the geometric shape of the stars, and at night it becomes a dramatic lightning storm animating the body of the building.

The New Mexico Museum of Art has the largest collection of work by Gustave Baumann in the world. On view at the same time as Alternative Spaces will be the exhibition Pulling Strings:The Marionettes and Art of Gustave Baumann, which will include the original marionettes carved by Baumann.

Alternative Spaces opens Friday, February 20, 2009 with a reception hosted by the Women’s Board of the Museum of New Mexico from 5:30 p.m. to 7:30 p.m. Admission is free and the public is welcome.

The New Mexico Museum of Art was founded in 1917 as the Art Gallery of the Museum of New Mexico. Housed in a spectacular Pueblo Revival building designed by I. H. and William M. Rapp, it was based on their New Mexico building at the Panama-California Exposition (1915). The museum's architecture inaugurated what has come to be known as "Santa Fe Style." For more than 90 years, the Museum has collected and exhibited work by leading artists from New Mexico and elsewhere. This tradition continues today with a wide-array of exhibitions with work from the world’s leading artists. The New Mexico Museum of Art brings the art of New Mexico to the world and the art of the world to New Mexico. 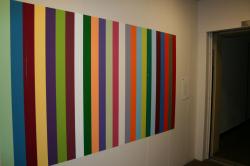 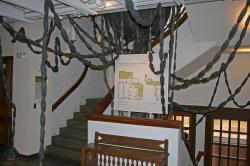 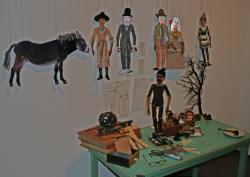 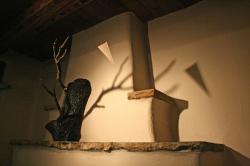 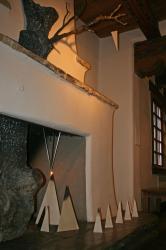 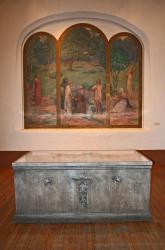 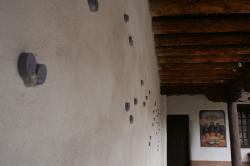 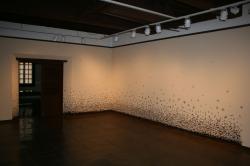 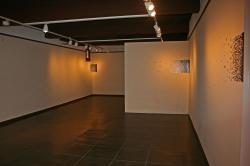 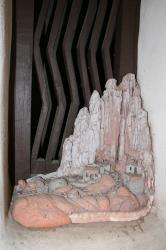