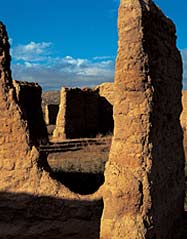 Fort Selden was established in 1865 in an effort to bring peace to the south central region of present day New Mexico. Built on the banks of the Rio Grande, this adobe fort housed units of the U.S. Infantry and Cavalry. Their intent was to protect settlers and travelers in the Mesilla Valley. Several of the units stationed at the fort were African American troopers, referred to as Buffalo Soldiers. A young Douglas Mac Arthur called the fort home while his father was post commander in the late 1880s.

By 1890 criminals and raiding parties were no longer considered a threat as hostilities eventually lessened and the fort was no longer needed. Like many small forts in the Southwest the government decommissioned the fort and it was abandoned in 1891.

Today the adobe brick walls of the frontier evoke a feeling of personal connection to the past. A visitor center offers exhibits on frontier and military life. Call for programming and special event dates.