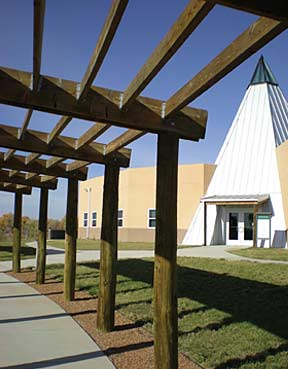 The Bosque Redondo Memorial at Fort Sumner presents a powerful acknowledgement of the colonization of the American West by the United States military. More than 10,000 Navajo and Mescalaro Apache prisoners suffered here from 1863 to 1868.

During this tragic period of U.S. history, the Navajo and Mescalero Apache Indians were starved into submission and then forced to march hundreds of miles to the Bosque Redondo Reservation. The Navajo call this journey the Long Walk. When they arrived, 9,000 Navajo and Mescalero Apache were spread as far as 20 miles along the banks of the Pecos River. Nearly one-third of the captives died during incarceration.

This experiment in social engineering was doomed to failure from the beginning. The Mescalero Apaches—450 strong—left without asking permission in 1865. The Navajo were held for three more years before the U.S. Government resolved to undo this terrible mistake. General William T. Sherman was sent to Fort Sumner in May of 1868 to negociate a new treaty. The Treaty of 1868 allowed the Navajo to return to their original homes in the Four Corners Regions and acknowledged Navajo sovereignty.

Today a unique new museum designed by Navajo architect David Sloan--shaped like a hogan and a tepee--and an interpretive trail and an audio tour narrated by actor Wes Studi, provide information about the tragic history of Fort Sumner and Bosque Redondo Indian Reservation. Plans are underway to construct Phase II of the museum.

Set next to the Pecos River and enhanced by a shady picnic area at the old fort, this Monument is a beautiful destination to visit and reflect on the history and "spirit of place".