Marking both her seventy-fifth birthday and three decades of living and working in New Mexico, Local Color: Judy Chicago in New Mexico 1984-2014 opens at the New Mexico Museum of Art June 6, 2014 and runs through October 12, 2014.

The exhibition will focus on both large-scale public projects and smaller-scale personal artworks and will be among the first to focus on recent works by Judy Chicago. 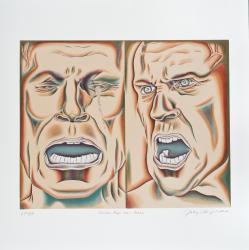 Rather Rage Than Tears, From The Retrospective In A Box