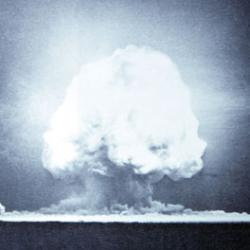 On July 16, 1945, the first atomic bomb was tested at what became known as the Trinity Site near Alamogordo, n.M. Robert Oppenheimer's invention, developed at a highly secret national laboratory in Los Alamos, illuminated the night sky for hundreds of miles and changed the course of world events. Besides helping to end World War II, research involved in developing the bomb has led to modern-day advancements in cancer treatment and alternative energy.

Palace of the Governors Photo Archives.