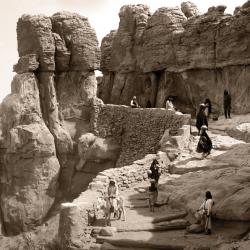 Acoma Pueblo residents traverse the rocky path of their "Sky City" village in central New Mexico. Noted American photographer Ben Wittick took this picture in the late 1800s. The Pueblo and its people have endured for centuries, along with their mesa-top village, a living example of the Southwest's ancient cultures (and a model for the New Mexico Museum of Art in Santa Fe).