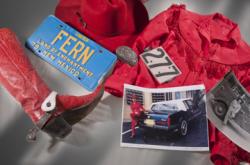 Artifacts from Cowboys Real and Imagined

Raised on a ranch at Nogal, New Mexico, Fern Sawyer (1917-1993) grew up doing a man’s work and often competed against men in rodeos. In 1945, she bested a field of men and women to become the first cowgirl to win the National Cutting Horse Championship. A colorful and outspoken promoter of New Mexico ranching , Sawyer received appointments to the State Racing Commission and State Fair Commission and was elected to the National Cowgirl Hall of Fame in 1976. She died in 1993, still in the saddle, with her boots on.