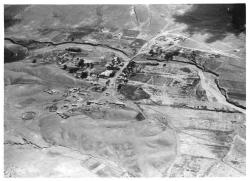 From the exhibition:
Oblique Views: Archaeology, Photography, and Time
Museum of Indian Arts and Culture

The village of Galisteo, south of Santa Fe, was established sometime between 1790 and 1816. Prior to the Pueblo Revolt of 1680, perhaps as many as fifteen thousand people lived in a number of very large pueblos in the Galisteo Basin. When the Spanish returned in 1692, the Pueblo Indians left basin communities and joined other pueblos, mostly along the Rio Grande. Sustained colonial use of the basin, beyond the early missions at the pueblos, started in the late 1700s with livestock grazing and the establishment of a military outpost. By 1929 Galisteo Creek was being used to irrigate farmed fields, some of which were laid out in the Spanish fashion in long narrow strips. Two fenced cemeteries can be seen to the left, and the road encircles the church in the center of the photograph—a building that was probably also the center of the village. Photograph by Charles A. and Anne Morrow Lindbergh, 1929.