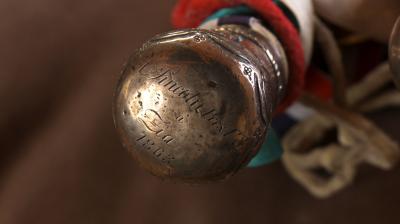 From the press release:
Canes of Power Film Screening


An engraving of President Abraham Lincoln’s name on one of the canes given to the 19 Native American Pueblos of New Mexico during Lincoln’s Presidency as a symbol of peace and sovereignty. This cane was given to Zia Pueblo.