Albuquerque, NM - While NASA’s Mars Perseverance Rover and Ingenuity Helicopter continue to explore the surface of the Red Planet, visitors to the New Mexico Museum of Natural History & Science (NMMNHS) will have a chance to explore life-sized replicas of the vehicles themselves beginning in November.

As part of NASA’s “Roving With Perseverance” Roadshow, which brings massive full-sized replicas of the two NASA vehicles to participating museums, NMMNHS will have the vehicles on display from Nov. 19 through June 5, 2023.

“Our museum takes great pride in its space science program, and we’re proud to be the only institution in the region selected to host these unique replicas,” said NMMNHS Executive Director Dr. Anthony Fiorillo.

The Perseverance mission is an ambitious effort to uncover signs of life on Mars. Since the Perseverance rover touched down on the Red Planet in 2021, it has been searching for signs of ancient microscopic life in order to collect and store samples of Martian rock and sediment, which will be retrieved by planned future missions for closer study on Earth. After traveling to Mars with Perseverance, the Ingenuity helicopter has completed more than a dozen short flights, proving that powered, controlled flight is possible on Mars and helping scout potential locations for Perseverance to explore.

NMMNHS is an appropriate venue for the replicas, as the Perseverance mission has been aided by research from the Museum. NMMNHS Research Curator Dr. Larry Crumpler was a contributing author on a pair of papers, published in the prestigious Science journal earlier this year, which evaluated findings from Perseverance taken from Mars’ surface. This work both enhances our understanding of the Red Planet’s history and helps bring the findings from the important mission into proper context.

The roadshow is designed to give visitors a better understanding of the Perseverance mission by allowing them to see the scale of the vehicles. As big as a car, with its camera “head” rising high, Perseverance’s six-wheeled lookalike towers over most visitors, while Ingenuity’s double highlights just how small the history-making rotorcraft is.

Visitors to the Museum will be able to see the replicas on display in the temporary exhibit gallery on the Museum’s first floor, located near Mars information and a separate replica of a previous Martian rover named Opportunity. This means that NMMNHS has the distinction of being one of only institutions on the tour to display two full-sized Mars rovers next to one another. The exhibition is included with Museum admission. Check NMNaturalHistory.org for future family days and other special announcements in conjunction with this unique exhibit, including a tour of the exhibit as part of the Museum’s upcoming Science Fiction or Fact? screening on Dec. 21. 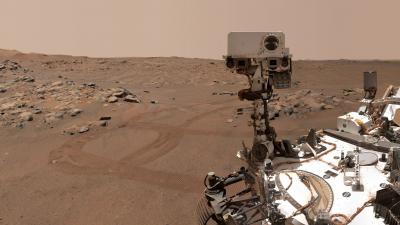