Gustave Baumann is one of New Mexico’s most treasured artists, known widely for his woodblock prints of Southwestern landscapes and traditions.

The New Mexico Museum of Art has a long-standing association with Baumann dating back to 1918 within a year of the museum’s founding. The artist stopped in Santa Fe to see an exhibit of prints he organized at the museum. He was instantly taken with Santa Fe, making arrangements to stay. He settled in, becoming an integral part of Santa Fe’s arts community—living and working here until his death in 1971.

The New Mexico Museum of Art has a comprehensive collection of Gustave Baumann’s work which includes prints, drawings, paintings, studies, furniture, and the eclectic menagerie of marionettes used to entertain generations of New Mexicans both young and old. Spotlight on Gustave Baumann opens February 1, 2014.

Baumann was born in Magdeburg, Germany in 1881 and moved to the United States with his family in 1891 where they established a home in Chicago. At age sixteen, shortly after his father left the family, Baumann became an apprentice at a commercial print studio and began taking evening classes in drawing and design at the Art Institute of Chicago. By 1903 he had established his own commercial art studio, and in 1905 he returned to Germany to study for a year at Munich’s Kunstgewerbe Schule (School of Arts and Crafts). In Germany, Baumann studied wood carving and the graphic arts, in particular the art of relief printmaking from Hans Neumann and Maxamilian Dasio. Returning from his studies, Baumann worked in New York, Chicago, and in Brown County, Indiana before moving to New Mexico. 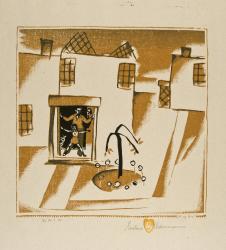 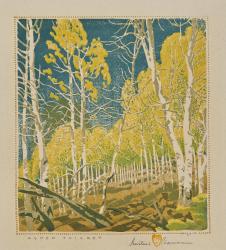