(Santa Fe, New Mexico) – The Museum of Indian Arts and Culture (MIAC)  will be hosting an opening reception with a panel discussion on Feb. 23, 2019, for its latest exhibit, Beyond Standing Rock. As the exhibition takes a look at art as advocacy, the museum proudly gathers individuals present at the NoDAPL protests. The reception itself will take place from 1:00pm to 4:00pm, serving appetizers and beverages. The discussion panel will take place at 2:00pm, featuring nationally celebrated artist-activists.

The exhibition takes a look at one of the most widespread grassroots movements in recent history, highlighting works created at the protest by Native and non-Native artists. From early 2016 to early 2017, the Sioux Nation (Očhéthi Šakówiŋ) of Standing Rock Reservation protested corporate abuses of Native sovereignty and welfare. The Dakota Access Pipeline (DAPL) planned construction through Standing Rock reservation, violating the 1851 Fort Laramie treaty and compromising the Sioux Nation’s access to clean water. As the movement grew, more than one hundred Native nations and allies gathered together to preserve the land through peaceful protest. The protest gained international attention through images, videos, and posters, and has inspired numerous new works, including a debut painting by Frank Buffalo Hyde.

Zoe Urness, photographer and Santa Fe local, presents her Heard Fair award-winning photo, Dec. 6, 2015: No Spiritual Surrender, which was nominated for the Pulitzer Prize in Feature Photography by World Literature Today. Urness, a member of the Tlingit Tribe, provides a look through the protestors’, or water protectors’, lens as veteran allies joined the movement. The photo captures the winter conditions water protectors endured as local authorities opposed action.

Cannupa Hanska Luger, a Mandan-Hidatsa-Arikara and Lakota multimedia artist, has invited national acclaim for creating works that speak to political and social activism. The Mirror Project, created for the water protectors of Standing Rock, engaged the public in making shields that obfuscated local authorities’ attempts to harness protests. The mirror itself reflected abusive counteraction back to DAPL security teams and Morton Country Law Enforcement. Since Standing Rock, the Mirror Project has been used in other resistance movements throughout the United States.

Tony Abeyta, a member of the Navajo Nation and mixed media painter, is a prominent Santa Fe artist exhibiting work around the country. He has received the 2012 New Mexico Governor’s Excellence in the Arts award and has served as a Native Treasure at the Museum of Indian Arts & Culture. His work may be seen in the Boston Fine Arts Museum, the New Mexico Fine Arts Museum, and the Smithsonian’s National Museum of the American Indian.

Kathy Whitman Elk Woman, a sculptor of the Mandan-Hidatsa-Arikara Nation, presents her work to the exhibition and joins the panel of artists to discuss art as a medium of social commentary. Elk Woman bases her work on her connection with her heritage and the nature around her. Her sculptures exhibited in Beyond Standing Rock marry the two concepts that source her inspiration: Native culture and environmental welfare.

The Museum of Indian Arts and Culture welcomes the public to the opening reception and panel discussion in hopes of inspiring conversation. Join these artists and activists as they merge their work with advocacy to create a better future. 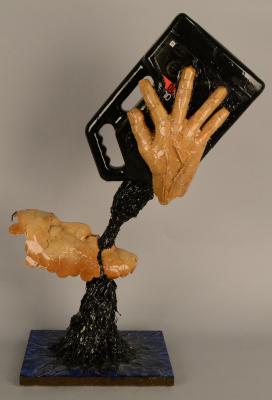 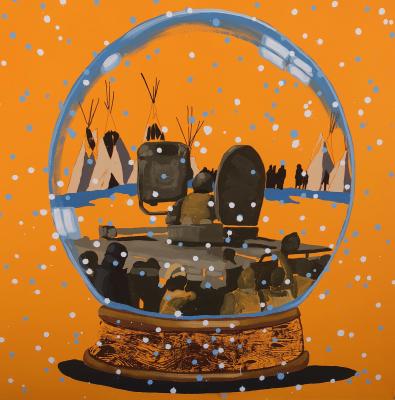