Día de Muertos (Day of the Dead) is a feast day celebrated in indigenous and mestizo communities throughout Latin America. Known as Todos Santos, Fieles Difuntos (All Souls), the celebrations have deep roots in pre-Hispanic indigenous cultures and in pagan and Catholic rituals. Each country, region and ethnicity has developed different ways of honoring their ancestors, always based on the same principles of responsibility and reciprocity that honor the role of the dead in the life of their families and communities.

As a part of their Día de los Muertos (Day of the Dead) celebration, the Museum of International Folk Art, in collaboration with Metamorfosis Documentation Project, will present the documentary film Noche de Animas. Tzintzuntzan. The film depicts the Feast of the Faithfully Departed in the P’urhépecha community of Tzintzuntzan in Michoacán, Mexico.

Noche de Animas. Tzintzuntzan is the culmination of a collaborative project of Metamorfosis Documentation Project (represented by Armando Espinosa Prieto and Craig Johnson) and the Centro Cultural Comunitario “Tzintzuntzan” in Tzintzuntzan to document the celebration of Day of the Dead in this community and to explore the relationships between the living and their dead.

The documentary investigates, as told through the voices of members of the community, how this agricultural ritual to celebrate the dead – the preparations for the celebration, the altars, and the sharing with the dead – strengthens ties of family, spiritual kinship and community.

Specifically highlighted in the film is the cultural legacy of the ancient P’urhepechas. In the celebration of Noche de Animas, family and community are regenerated in a ritual of cultural unity that features the generous sharing of abundance, evoking a feeling of belonging and well-being.

Metamorfosis Documentation Project (MDP) is a local nonprofit organization based on a belief in the richness and importance of cultural traditions, focusing on cross cultural rituals and dances in the Americas.

Through projects with mestizo and indigenous communities, MDP, in collaboration with their community museums, documents, and supports rituals and dances in their own cultural settings and shares them with a wider audience, fostering an understanding of distinct cultures.

These collaborative projects typically involve three phases: 1) the documenting of the tradition through filming and interviews, resulting in a documentary film, with rights to reproduction and sale of the film being gifted to the Community Museum; 2) a related project sponsored by MDP in direct support to the community; and 3) public presentation of the results of the project including documentary film screenings, submissions to film festivals, lectures, photographic exhibitions, web presentations, and related art works that offer opportunities for wider audiences to experience an inside look at cultures and community rituals markedly different from their own.

Executive Director Armando Espinosa says the mission of MDP is “to help to protect, preserve, and promote traditional cultures in the Americas.”

MDP began working with indigenous communities in the late 1990’s, collaborating on a small scale project with a small Rarámuri (Tarahumara) community in Copper Canyon in Chihuahua, Mexico to document their Semana Santa (Holy Week) celebration.

The Danza de la Pluma Project involved a collaboration with the “Balaa Xtee Guech Gulal” Community Museum in the Zapotec community of Teotitlán del Valle, Oaxaca, to document the Danza de la Pluma and produce a documentary film. With MDP not yet having an established 501(c)(3) status, the Santa Fe Art Institute generously offered to serve as fiscal sponsor for this Project.

The Danza de la Pluma is a traditional dance performed for the Patron Saint’s Day and other important Saints’ Days in the community. A Grupo de Promesa (Promise Group) consisting of young men and two girls is formed and commits to dance for these occasions for three years, in service to the community. The Grupo de Promesa sponsors the dance presentations and related costs and fiestas.

The community support portion of this Project consisted of the creation of a permanent exhibit room in the Community Museum dedicated to the Danza de la Pluma.

The documentary produced during this Project, Danza de la Pluma. Faith, Sacrifice and Tradition, has been presented by MDP in several museums and universities in Mexico and the United States, and was an official selection of the Cine Las Americas International Film Festival in Austin, Texas in 2009.

Also in 2009, MDP, with support from the Mexican Consulate in Albuquerque, the New Mexico Department of Cultural Affairs, and several local businesses, brought the dance group, Grupo de Promesa 2007 – 2009, to New Mexico to present the Danza de la Pluma. The Dance was presented at Plaza Contenta in Tierra Contenta, an immigrant-rich community in southern Santa Fe, at El Rancho de las Golondrinas in Santa Fe, at the National Hispanic Cultural Center in Albuquerque, and at the Camino Real International Heritage Center in Socorro.

The Todos Santos Project involved a collaboration with the Unay Pallay Weavers Cooperative’s Community Museum in the Quechua community of Candelaria, in the southern Andes of Bolivia, to document Todos Santos, the Yampara culture’s version of Day of the Dead.

The community support portion of this Project consisted of the creation of a multimedia permanent Todos Santos Exhibit in the Unay Pallay Weavers Cooperative’s Community Museum.

This Project’s documentary, TODOS SANTOS / Feast of the Souls, has been presented by MDP in several museums and universities in Bolivia, Mexico and the United States.

The first phase of this Project introduced a new collaborative element to MDP’s process in an effort to encourage the documentation, preservation, and promotion of these cultural traditions by members of the local community. Two apprentices, chosen by the Museum Committee, assisted in the documentary work. The apprentices actively participated in the production portion of the Project, including filming and interviewing community members. This phase culminated in the production of the documentary, La Festividad de los Muertos / Lanii Xtee Tugul.

The community support portion of the Project consisted of improving and expanding the Day of the Dead exhibit in the Community Museum.

La Festividad de los Muertos / Lanii Xtee Tugul has also been presented by MDP in several museums and universities in Mexico and the United States.

The Day of the Dead Tzintzuntzan Project, MDP’s current project, involved a collaboration with the Centro Cultural Comunitario “Tzintzuntzan” (Tzintzuntzan Community Cultural Center) to document the traditional celebration of Noche de Animas in the P’urhépecha community of Tzintzuntzan, Michoacán.

The first phase of this Project again included MDP’s apprentice program, with two apprentices chosen by the local Tzintzuntzan Preparatory School who participated in the filming and interviewing of community members. In an additional collaboration in this phase, with support from New Mexico Film Resource, the Santa Fe Community College Film Department sent two students to work with MDP as apprentices during the filming of the actual Day of the Dead celebrations. This phase culminated in the production of the documentary, Noche de Animas. Tzintzuntzan.

MDP is now in the third phase of this Project, and is presenting Noche de Animas. Tzintzuntzan in museums and universities in Mexico and the United States. Among various presentations to date, MDP, with support from the Mexican Consulate in Seattle, screened the film for an expatriate community of Tzintzunteños in Tacoma, Washington on November 2 of last year.

The Consulate of Mexico in Albuquerque presented the renowned Ohtli Award to the Metamorfosis Documentation Project in recognition for this organization’s work with the Mexican indigenous and mestizo communities. The ceremony was held at the Albuquerque Museum on September 18th, 2019. MDP develops projects in benefit of these communities to help them to preserve, protect, and promote their culture.

The Ohtli Award is granted by the Institute of Mexicans Abroad (Instituto de Mexicanos en el Exterior), a division of Mexico’s Secretariat of Foreign Affairs (Secretaría de Relaciones Exteriores). It has been presented annually since 1996 by individual embassies and consulates to people or organizations for their contributions to the Mexican community abroad in any human endeavor.

Ohtli is a Nahuatl word meaning "path" alluding to the idea of opening a path for others. The Ohtli Award recognizes individuals and organizations who have aided, empowered, or positively affected the lives of Mexican nationals in the United States or other countries.

“We are deeply grateful for this recognition of our cultural work and the impact it has in audiences in the United States," said Armando Espinosa Prieto, Executive Director of MDP. "We thank the Consulate of Mexico in Albuquerque and the Secretariat of Foreign Affairs for this great honor of granting us the 2019 Ohtli Award.”

Armando Espinosa Prieto and Craig Johnson will preface the presentation of the documentary with a multi-media lecture on the history and current state of the rituals and celebrations of Day of the Dead.

706 Camino Lejo, on Museum Hill in Santa Fe, NM 87505. (505) 476-1200. Hours: 10 a.m. to 5 p.m. daily, May through October; closed Mondays November through April, closed Easter Sunday, Thanksgiving, Christmas, and New Year’s Day. Events, news releases and images about activities at the Museum of International Folk Art and other divisions in the Department of Cultural Affairs can be accessed at www.media.newmexicoculture.org. 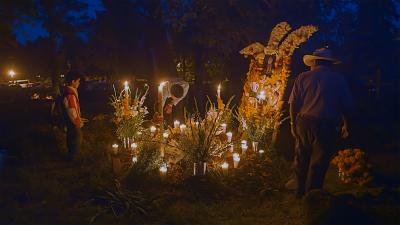 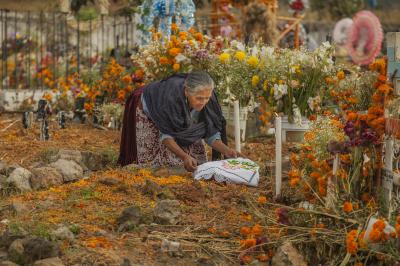