Visitors to the New Mexico Farm & Ranch Heritage Museum in Las Cruces are now greeted by a beautiful, new sculpture in front of the Bruce King Building.

The life-sized bronze by Albuquerque artist Reynaldo “Sonny” Rivera captures the determination and skill of barrel racer Amberley Snyder. Rivera, a native of Mesquite, N.M., read an article in Horse & Rider Magazine about Snyder’s inspirational story of competing in the sport she loves after being paralyzed from the waist down in a vehicle accident when she was 18.

“I was so intrigued by her story, and was inspired by it, that I called Amberley and got permission to feature her as the model for the barrel racer in my sculpture,” said Rivera, who named the art piece “True Grit.”

Snyder, now 28, returned to barrel racing with a special saddle 18 months after the accident. She also shares her story as a motivational speaker.

Rivera has received many public art commissions in New Mexico and around the country. As with “True Grit,” the subjects of Rivera’s sculptures have been about people who have faced challenges and overcome adversities.

Among Rivera’s many awards is the 2014 “Rounder’s Award” from the New Mexico Department of Agriculture for helping preserve the Western way of life.

The sculpture, which is for sale, is on loan to the Museum through September 2020. 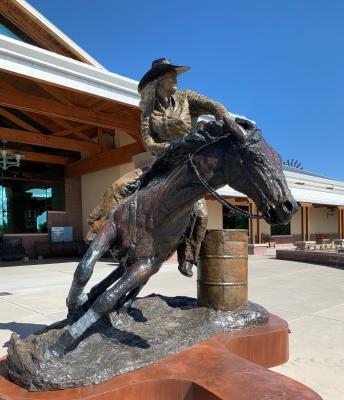