(Santa Fe, New Mexico) -- The Museum of Indian Arts and Culture (MIAC) is pleased to announce Kathleen Wall (Jemez Pueblo) as the 2020 recipient of the Native Treasures Living Treasures award. This award honors Native American artists who have made outstanding artistic contributions to the field of indigenous arts and culture.

“The palate of my work reflects where I live,” says Wall. “The Native Cultures of my family and friends have always been my inspiration. The high desert surroundings, and the earth colors that surround me, are as much a part of me as they are a part of my art.”

Wall learned traditional Pueblo pottery from her mother, Fannie Loretto and aunts Dorothy Trujillo, Mary Toya, Edna Coriz and Alma Concha. Throughout her formative years, Wall considered Pueblo Pottery a basic ingredient in her life. As a young woman she looked on as her grandparents, mother, and aunts all made pueblo pottery, and Wall followed in their footsteps.

“I have begun my creative process with the same actions as my mother, my grandmother, and my great grandmother before her,” says Wall. “I dig clay and volcanic ash in the same places that my mother showed me as a young girl. I have created most of my clay figures using traditionally processed clay from here in Jemez Pueblo…where I began.”

“When I create in Native clay I feel a very strong connection to my heritage.  Like so many Pueblo potters working today, I feel as though I’m fulfilling my grandmother’s legacy passing on the knowledge of Pueblo pottery,” says Wall. “The beauty of Native culture in and around my life gives me inspiration to create art.  This inspiration is expressed by Native figures sculpted in clay that have a joyous quality in their faces.”

MIAC Director Della Warrior said the institution is “thrilled to showcase her work and spotlight her talent and diversity of artistic styles with the exhibition of her current work scheduled to open this coming March.”

While Wall began her artistic journey making storytellers, she says she knew all along in her heart that she was destined to transcend the traditional art that she was taught. During her late teens, Wall’s works began to take on more figurative qualities. The artist contends that she was “a young girl in the midst of something I had a passion for.” The combination of studies in her chosen discipline and having the opportunity to attend professional art shows opened her eyes to the diverse creativity of contemporary Native art.

Wall holds an Associate of Arts and Bachelor of Arts degrees from the Institute of American Indian Arts. She was the 2000 Southwest Association for Indian Arts Fellowship recipient and the Dobkin Fellow at the School for Advanced Research in 2016. She also won Best in Show for her work at the Eiteljorg Museum Market in 2017.

Wall enjoys participating in juried art shows as they allow her to express herself through creativity, which brings an awareness and understanding of Native arts and cultures around the world. Wall is deeply grateful for the success they have afforded her.

Admiration for her work is evidenced by the overwhelming response to her first solo show “Celebrating Native Legacies: Works in Clay by Kathleen Wall of Jemez Pueblo” at the Indian Pueblo Cultural Center. The exhibit incorporated multimedia elements to tell two stories—the traditional and the contemporary. Wall expressed herself through various media such as video and photography that she incorporated into her clay installation pieces. Her installation art has added a new dimension and depth to her career, permitting her to explore different media and challenging her creativity.

"The Native cultures of my family and friends have been my inspiration for years, and I continue to draw on their strengths and their surroundings for my creativity,” Wall says. “And embracing mixed media in the last decade has allowed me to engage in significant conversations within Native communities,” says Wall. “Land and identity have been a focal point of my mixed media art. Working with clay sculptures and acrylic paintings to create cohesive work has been a new reflection of my ever-evolving relationship with my art.”

710 Camino Lejo off Old Santa Fe Trail, Santa Fe, NM 87504, Phone: (505) 476-1269.Hours: 10 a.m.  to 5 p.m. daily, May through October; closed Mondays November through April, closed Thanksgiving, Christmas and New Year’s. Events, news releases and images about activities at the Museum of Indian Arts and Culture and other in divisions of the Department of Cultural Affairs can be accessed at media.newmexicoculture.org. 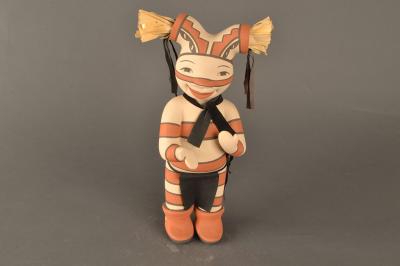 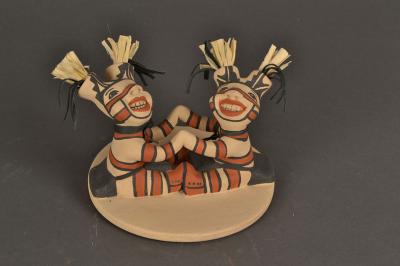 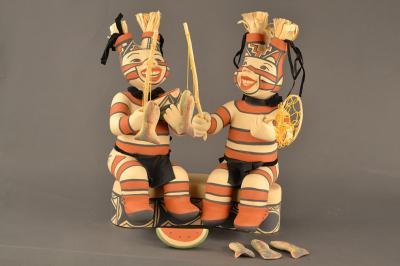