(Albuquerque, New Mexico) – The National Hispanic Cultural Center is the setting for two unique evenings of diverse entertainment about our past and our future.  Be part of the celebration of ¡Música del Corazón! November 13, and the celebration of Hispano folk songs with the film ¡COLORES! The Musical Adventures of John Donald Robb in New Mexico November 14.

On the wings of melody, rhythm and poetry, ¡Música del Corazón! concerts feature new groups and different traditions each year from the “folk” repertory of traditional música nuevomexicana, a vast and varied medley of old and new music. The concerts honor the contributions of John Donald Robb, Sr., former dean of the University of New Mexico’s College of Fine Arts and a recognized music pioneer. They are dedicated in memory of his son, John Donald Robb, Jr, a driving force in the development of the UNM John Donald Robb Musical Trust.

This is the sixth annual John D. Robb, Jr. concert and 30th anniversary celebration of the Robb Trust. This year’s event features Frank McCulloch, Cipriano Vigil, Bayou Seco and Lone Piñon. Emceed by Dr. Enrique Lamadrid, a nationally recognized folklorist and musicologist, the event also includes the presentation of the 2019 Robb Award for Excellence in Music of the Southwest.

This is a free public event.

Thank you to our Performing Arts Season Sponsors Heritage Hotels and Resorts, the Albuquerque Journal and Southwest Airlines!

A film, ¡COLORES! The Musical Adventures of John Donald Robb in New Mexico, plays in the Bank of America Theatre at 7 p.m. Thursday, Nov. 14. This is a free ticketed event; tickets available one hour before show.

The late John Donald Robb loved and composed all kinds of music, but his passion for the songs of everyday folk is what he is remembered for most. Roaming the countryside of the Southwest during the 40s and 50s, Robb recorded and transcribed over 3,000 Hispano folk songs, the largest collection of its time.

This 2008 documentary celebrates the life of this adventurous musician and the modern ethnomusicologists who continue to record and archive New Mexico’s disappearing folk music traditions. Presented in partnership with New Mexico PBS and the John Donald Robb Musical Trust as part of the Bank of America Free Thursday Film Series.

The screening will be followed by a live performance of selections from John D. Robb’s Joy Comes to Deadhorse, the precursor to The Fantasticks, narrated by V.B. Price and performed by the New Mexico Performing Arts Society under the direction of Franz Vote. There will be a dessert reception in the lobby after the performance. 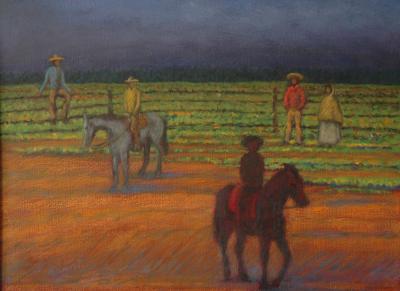