(Albuquerque, New Mexico) -- The Nutcracker in the Land of Enchantment will again be performed on the National Hispanic Cultural Center’s (NHCC) Albuquerque Journal Theatre stage this holiday season, Dec. 20-22, 2019. Last year’s production, presented by Festival Ballet Albuquerque and the NHCC, with choreography by Patricia Dickinson Wells and full live orchestra under the baton of Maestro Guillermo Figueroa, sold out.

The Nutcracker in the Land of Enchantment transports the beloved holiday classic to territorial New Mexico in the late 1800s, with added elements of the state’s heritage and traditions including Spanish dancers, southwestern snakes, sheep and shepherdesses, a lively fandango, a Cochiti Storyteller doll with children, the Roadrunner and Coyote, and lavish Victorian-era western costumes, while still resplendent with classical tradition.

Now in its ninth year at the NHCC, the production showcases New Mexico heritage and traditions while maintaining the classical grace and family appeal of its origins. The live orchestra brings the production to life; Maestro Guillermo Figueroa is an internationally renowned conductor and violinist and a 2012 Latin Grammy nominee.

D.S. Crafts previously wrote in the Albuquerque Journal: “The Nutcracker in the Land of Enchantment, which opened Friday night at the National Hispanic Cultural Center, works splendidly. Far from distorting the story to fit the idea of the director, this production breathes fresh life into an often-overdone classic. Choreographer Patricia Dickinson Wells has added just enough local color to create a spectacular staging of a beloved classic.”

For interviews and more information about The Nutcracker in the Land of Enchantment, please contact Patricia Dickinson Wells at contact@festivalballetabq.org or (505) 440-6330. 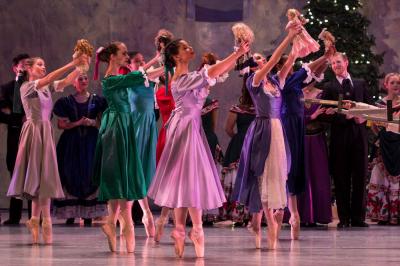