(Albuquerque, NM) -- The rims of large impact craters on Mars are even more unusual than we thought. In recent research published in the prestigious scientific journal “Geology,”* lead author Larry Crumpler, planetary geologist and research curator at the New Mexico Museum of Natural History and Science, and other team members on NASA’s Mars Rover Opportunity Mission describe unexpected geologic features encountered on the rim of the 22 kilometer (13 miles)-diameter impact crater Endeavour. Observations along Opportunity’s traverse showed that while pre-existing rocks at Endeavour crater were shoved upward and tilt outward like those seen in small craters like the Barringer (Meteor) Crater on Earth, in an unexpected twist, at Endeavour crater they also arch over at the rim and tilt inward.

“Opportunity had been traversing on Mars for over 45 kilometers (28 miles) over its 14.5 year lifetime and there have been many “firsts”. Now we have added to that list of firsts the first drive along the rim of a very large impact crater. Observations of the outcrops and landscape during that drive led to some surprising results,” Crumpler said. “We were able do continuous geologic mapping along the rover path and it was this mapping that led to these results. The mapping represents the first field geologic mapping on another planet made by examining outcrops on the surface and mapping their differences and relationships just as a geologist does in the field here on Earth.”

Opportunity landed on Mars two weeks after its sister rover Spirit in January 2004 was in continuous operation until 2018; It traveled farther than any rover previously over the surface of another planet. During that time it determined that rocks showed evidence of being literally soaked in water billions of years ago when many of the rocks were laid down. The mission was ended in the summer of 2018 when the rover’s solar panels were unable to recharge its batteries during the worst global dust storm in decades. At the time of the global dust storm, Opportunity was making its way down a valley on the inside of the crater rim, Perseverance Valley. (Perseverance Valley was named two years ago and is unrelated to the recently named Mars rover “Perseverance” to be launched this year.)

“Besides the frustration of the mission being terminated unexpectedly, having the mission end just as we were descending the valley toward the crater interior was particularly unfortunate. We were using a really appropriate informal naming theme for rocks and features during this part of the mission. Naming themes throughout the mission often were based on the names of geographic features and historical people on Earth; and during the drive down Perseverance Valley, “the names used were from places along the Hispanic Southwestern historical trade route, El Camino Real de Tierra Adentro, which included many names from right here in New Mexico,” Crumpler noted.

Endeavour crater is as big as a large city on Earth. Craters this large on Earth are all old and deeply eroded. The rims are not preserved and therefore, details of their surface geology have been unknown. Previously it was expected that the geology of crater rims this large would be similar to much smaller uneroded, and well-studied craters on Earth, such as Barringer (Meteor) Crater in Arizona. In Barringer Crater flat-lying rocks sedimentary existing before the impact were shoved upwards and tilted outwards along the rim at the time of crater formation, so the inward sloping layers at Endeavour crater were a surprise.

In addition to the inward-sloping rim layers, the Endeavour crater rim was not a continuous ridge, but was segmented. Crumpler explains: “Long segments were standing much higher than adjacent rim segments, and the transition was abrupt. We think there is evidence that the transitions between topographic segments are a result of faults radiating from the crater across the rim.” Some of the segments appear to have been pushed up more than adjacent segments and the difference in uplift is accommodated by deep faults. At these “fault zones” Opportunity identified significant alteration, which can be interpreted as evidence for groundwater in the past. “Because rocks are crushed and relatively permeable along fault zones, they could have acted as conduits for groundwater soon after the impact crater formed, including hot groundwater heated by the residual energy of the impact process.”

Large impact craters are one of the most common geologic features on Mars and this work will provide a template for understanding many outcrops encountered in future missions.

This research was part of the MER Science Team results funded by contracts by the Jet Propulsion Laboratory in Pasadena California and NASA. 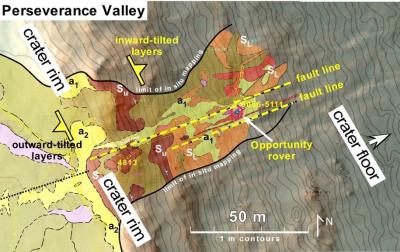