“Our Fair New Mexico” includes performances by musicians living in New Mexico. On Friday, May 29, the ninth concert of the series will feature Joe & Archie West. Hosted by the Museum of International Folk Art (MOIFA), this concert is in conjunction with the exhibition Música Buena: Hispano Folk Music of New Mexico and the traveling Wonder on Wheels version Música Buena: Celebrating Music in New Mexico, funded by the International Folk Art Foundation.

Watch the concert at 7 p.m. on MOIFA’s Facebook Page https://www.facebook.com/InternationalFolkArt/

Joe West (pictured above, right) is a local impresario, producing theatrical events around his hometown of Santa Fe and throughout New Mexico. His award-winning folk music has been described as quirky, offbeat, and melodic, and features a mix of country and rock, which he has been recording and releasing on cassettes, CDs, and vinyl records since the mid-1980s.

With tours across the U.S. and Europe, Joe has shared the stage with musicians such as Peter Rowan, Arlo and Sara Lee Guthrie, Mojo Nixon, and James McMurtry, and bands like the Violent Femmes. Additionally, he has produced a rock opera, developed music for film and television, created a conceptual radio show, founded a film festival, and established a theater company that performs his horror-comedies with original live music.

Archie West (Joe’s uncle) is a rancher and longtime singer of cowboy songs and American folk songs. Born and raised on his family’s land just south of Santa Fe, where he still resides and works, Archie is known as a local waltz and two-step legend. Western novelist Jack Shaefer based his popular character, Monte Walsh, on him. 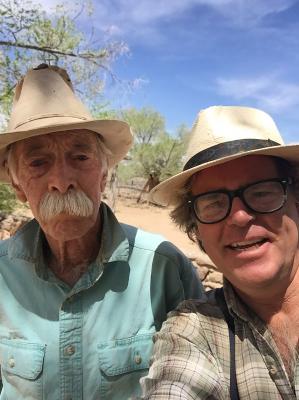