The Museum of International Folk Art (MOIFA) invites you to a virtual Día de los Muertos concert featuring Las Flores del Valle of Albuquerque. The event will take place on MOIFA’s Facebook Page at 7 p.m. MDT on Sunday, November 1, 2020. This concert is in conjunction with the exhibition “Música Buena: Hispano Folk Music of New Mexico,” funded by the International Folk Art Foundation.

Carol Vigil and Leila Flores-Dueñas comprise the New Mexico women’s dueto, whose smooth harmonies are reminiscent of the many hermanas duos that became famous during the 1960s. These groups helped form the lasting harmony structures of today’s U.S./Mexico Borderlands music scene. Accompanied by multi-talented musician and cultural anthropologist David F. Garcia, Las Flores del Valle aim to preserve and share the nuances of the many musical genres that are representative of their family histories.

Las Flores del Valle has shared their talents at venues such as the Gene Autry theater in Los Angeles, Universidad Pedadógica Nacional in México City, and the National Hispanic Cultural Center in Albuquerque. This has allowed the group to showcase their forte of preserving cultural traditions and Southwest history through the arts. The group is also known for presenting about life along the U.S./Mexico border on topics related to the role of corridos (stories told in song) in Mexican and Southwestern music, soldaderas of the Mexican Revolution, Día de los Muertos, and women’s roles in Borderland music. 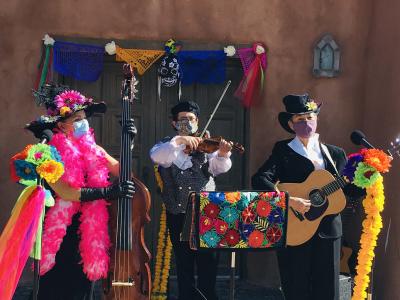