The Museum of International Folk Art (MOIFA) is excited to announce that the popular exhibit “Yokai: Ghosts and Demons of Japan” is now available for viewing on the Museum’s website. The virtual exhibition can be found at https://yokai.moifa.org/#/

MOIFA opened the exhibition in December 2019 and was one of the first museums to present a large-scale yokai-centered exhibition in the United States.

Yokai are supernatural beings (like ghosts, demons, ogres, shapeshifters, and monsters) and other unexplainable phenomena. They gained popularity beyond religious contexts, beginning perhaps as early as the Muromachi period (1392-1573). These ghost and demon images have surfaced throughout Japanese history, and have even influenced modern entertainment and popular culture.

In conjunction with the Yokai exhibition, MOIFA will also host two virtual events to celebrate Halloween. The first event will be a night of ghost storytelling featuring award-winning author Joe Hayes and Satori Murata. Hayes has published more than 20 children’s books, has visited about 3,000 schools, and has been the resident storyteller at the Wheelwright Museum of the American Indian in Santa Fe for 26 years. Murata is a Santa Fe-based Japanese language teacher and translator who worked with curator Felicia Katz-Harris on the Yokai exhibition.

The second event will feature award-winning artist Joel Nakamura. Nakamura is known for his unique style: a blend of folk art and sophisticated iconography rendered in a neo-primitive technique. He is chosen for many of his commissions for his knowledge of tribal art, mythology, and for his ability to convey stories and information in an intricate and engaging manner.

Below is more information on the events and links to access via Zoom. 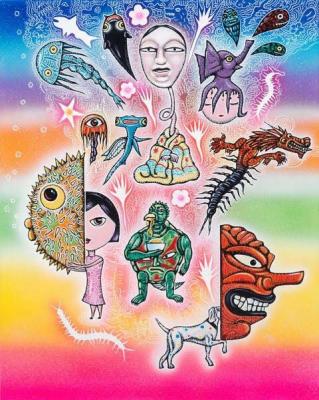