A popular exhibit at the New Mexico Farm & Ranch Heritage Museum that explores the incredible transformation of the Tularosa Basin during World War II is now online.

Visitors to the Museum’s website at www.nmfarmandranchmuseum.org can view the online version of “Home on the Range: From Ranches to Rockets.” This virtual exhibit is more than just photographs and words. It also features videos and oral history audio files.

Another new online component to the exhibit will be educational lesson plans for students.

Visitors will learn about ranch life in the Tularosa Basin during the early 20th century, and how events taking place halfway around the world brought about changes that for many ranchers were permanent. The area eventually became White Sands Missile Range, drawing some of the world’s greatest minds in science and engineering.

“If it hadn’t been for the V-2 rockets that were discovered in Germany and brought to New Mexico for research and testing, the land might very well have gone back to the ranchers after the war,” Tookey said.

The museum’s exhibits staff and curators spent months of research and planning the physical, onsite exhibit, and construction in the galleries was extensive.

The gallery exhibit features everything from replica structures that include a ranch house, tool shed, and a military block house, to items as big as a V-2 rocket engine and a Loki Dart rocket, and as small as toys and kitchen utensils. Interactive activities for children include period games and a paper rocket-making station.

Tookey became interested in the subject during a tour of White Sands Missile Range when she was employed at the New Mexico Museum of Space History in Alamogordo. When she began working at the New Mexico Farm & Ranch Heritage Museum a few years later, she suggested this story as a future exhibit.

The Museum collaborated with White Sands Missile Range and the New Mexico Museum of Space History on this exhibit. The project fits with the recent appreciation of space exploration in the Las Cruces region, where space festivals in Las Cruces and El Paso have been organized in the past couple of years, and where nearby Spaceport America is beginning commercial spaceflight. 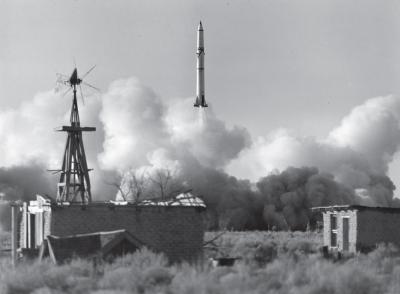