ALBUQUERQUE – The New Mexico Museum of Natural History & Science’s new virtual exhibition, “Sayaka Ganz: Reclaimed Creations,” shows how plastic and art can merge to create living expressions with a sense of movement and self-awareness. On display at the museum in 2020, this exhibit has been digitally preserved and is now available for online viewing.

In “Reclaimed Creations,” Sayaka Ganz visually transforms common household items such as spatulas, spoons, plastic hangers, and cooling utensils into sculptures that depict animals rich in color and energy. The artist was influenced by the Japanese Shinto belief that all objects and organisms have spirits, that if these items are discarded before their time they will weep inside the trash bin. She finds the process of reclamation and regeneration liberating.

“My work is about perceiving harmony, even in situations that appear chaotic from the inside,” said Ganz. “When observing my sculptures up close, one might see gaps, holes, and items being held on only by small points; step away, however, and the sculptures reveal the harmony created when the objects are aligned to the same general — but not identical — direction.”

Ganz classifies her work as three-dimensional impressionism, creating an illusion of solid form using plastic objects as brush strokes that become visible only upon observation from close proximity.

Ganz’s collagraph plates are also made of reclaimed items such as expired parking decals, paper boxes, and green plastic films from takeout sushi containers. While depicting the same animals portrayed in her sculptures, her prints are more mystical in their interpretation.

The exhibition can be found at http://nmnaturalhistory.org/events/virtual-walk-through-tour-reclaimed-creations-sayaka-ganz, and includes access to extra content such as interviews with Ganz and music inspired by her art. 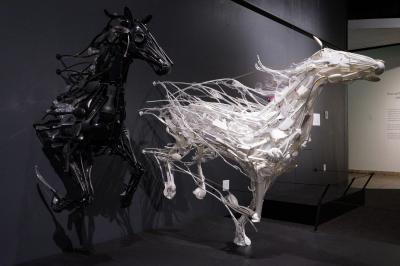