With assistance from the New Mexico Museum of Natural History & Science (NMMNHS), a team of researchers from multiple institutions has named Dracopristis hoffmanorum, a 6.7-foot-long shark that lived 300 million years ago based on a complete skeleton found in the Manzano Mountains, about 30 miles southeast of Albuquerque.

Dracopristis had 12 rows of piercing teeth in robust powerful jaws, and bore two 2 ½-foot long fin spines on its back. This combination of features gave this shark the popular nickname “Godzilla Shark” when it was discovered in the Manzano Mountains in May 2013. A group of scientists who had been participating in a scientific meeting at NMMNHS were visiting the mountains to learn about the rocks and exceptional fossils of late Pennsylvanian Period plants and animals preserved there. Just as the group was about to leave, Hodnett, a graduate student at the time, came across something unexpected.

“I was just sitting in a shady spot using a pocket knife to split and shift through the shaley limestones, not finding much except fragments of plants and a few fish scales, when suddenly I hit something that was a bit denser,” said Hodnett, a specialist in ancient sharks. “At first, I thought what was flipped over was the cross-section of a limb bone, which was exciting as no large tetrapod had been found at that site before.”

Hodnett’s discovery drew excitement from the crowd of scientists, and a team from the NMMNHS got to work quickly to expose more of the fossil, as the rest of the meeting participants went back to the Museum. It wasn’t until the next day while Hodnett was working with a colleague in the NMMNHS collections, that he found out what had been uncovered. “The Museum fossil preparatory, Tom Suazo, came in with this cardboard tray in his hand and a huge grin on his face, saying that it wasn’t a tetrapod that I found but a really big shark,” recalled Hodnett.

The tray contained bits of rock that had the impressions of the fin spines, and the pattern was indicative of a ctenacanth shark, a group Hodnett specialized in. Dr. Spencer Lucas, curator of paleontology at NMMNHS, encouraged Hodnett to research the new fossil, which turned out to be the most complete ctenacanth shark fossil to be discovered in North America.

After seven years of work in the Museum’s preparation lab to clean and stabilize the fossil, research comparing it to other ancient sharks, helped by a CT scan of the fossil by Presbyterian Rust Medical Center in Rio Rancho, Hodnett’s team determined that it was a new kind of ctenacanth shark. The name Dracopristis hoffmanorum, or Hoffman’s Dragon Shark, is in recognition of some of its Godzilla-like traits (the largest fish found at the site so far and having big jaws and large spines), and honoring the Hoffman family, who owns the land where the shark fossil was collected.

By looking at the rocks where it was found and the anatomy of Dracopristis, the team determined that the Dragon Shark likely lived in shallow lagoons and estuaries, cruising near the bottom of the waterways to ambush prey such as crustaceans, bony fish, and other sharks.

The large dorsal fin spines of Dracopristis acted as a deterrent against larger predators. “In the same rocks that yielded the fossil of Dracopristis, we have found teeth of a larger shark called Glikmanius, which is known almost worldwide at this time, and it would have been a large and dangerous predator” said Hodnett.

The new skeleton of Dracopristis also offers new insight into how ctenacanths fit on the family tree of sharks. Thus, Dracopristis and other ctenacanth sharks represent a unique evolutionary branch of the sharks that split off from the modern sharks and rays approximately 390 million years ago, but that went extinct by the end of the Paleozoic Era, about 252 million years ago. 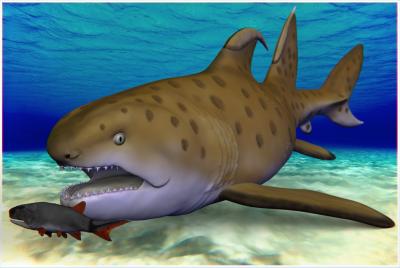 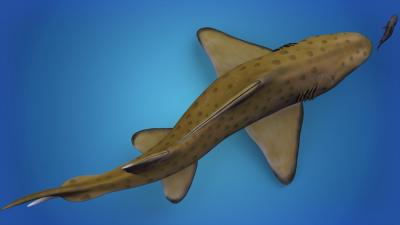 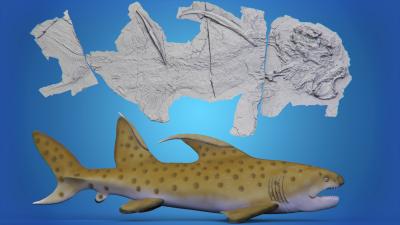 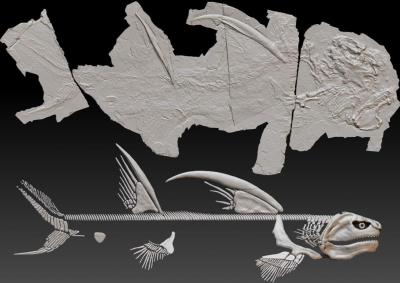