ALBUQUERQUE – The National Hispanic Cultural Center (NHCC) will host an online performance of “Conjunto Blues,” the Albuquerque premiere of this critically-acclaimed one-person show written and performed by playwright, actor, and musician Nicolás R. Valdez and directed by Joel C. Settles, at 7 p.m. on Thursday, April 29. Following the performance, Valdez will host a question-and-answer session, during which audience members can discuss the show and ask questions about conjunto music in general. Click here to register for this free, live-streamed virtual event, which will also be accessible until 9 p.m. on Sunday, May 2 on National Hispanic Cultural Center Foundation’s YouTube channel.

“Conjunto Blues” explores the social and historical conditions that led to the development of conjunto music as an expression of cultural resistance and liberation. Centering on Valdez’s personal experience growing up in the conjunto music scene, the work is loosely based on his relationship with his grandfather, also an aficionado of this musical form. The audience will be taken through a shifting landscape of memory and reflection highlighted by traditional music performed by Valdez and fellow musicians Luis Gonzalez on bajo sexto (a 12-string Mexican guitar), Sarah Rocha on tololoche (upright bass), and Joaquin Abrego on batería (drums).

“The focus of this work, for me, has always been to highlight the many contributions of the Mexican-American community to the cultural fabric of this country, and to show audiences how conjunto music, an original and uniquely American form of musical expression, became the soundtrack for the 20th century Mexican-American working-class experience,” said Valdez.

At 2 p.m. on Saturday, May 1, Valdez will present an hour-long live-stream workshop and discussion on the specific themes drawn from pre-recorded interviews and historical documentary footage that he has compiled. And at 2 p.m. on Sunday, May 2, performance sponsor AARP will offer a live webinar on brain health and the arts, including the intrinsic connection between music and memory, the lasting effects of music on the brain, and tools to assist in boosting brain health and wellness. Access to the live workshop and/or webinar is free to members of the NHCC Foundation and the AARP, as well as to donors contributing at least $50. Donations to the NHCC Foundation support all of the National Hispanic Cultural Center’s programs and educational services. To register for the workshop, click here. To register for the webinar, click here.

“Conjunto Blues” was first shown in 2013 in Denver with the support of Su Teatro, the National Endowment for the Arts, and the National Performance Network. The work has also been performed at venues across the country, including the Fox Theater in Tucson, Guadalupe Cultural Arts Center (GCAC) in San Antonio, and the Los Angeles Theater Company’s Encuentro de las Américas. “Conjunto Blues” was adapted for online viewing in November 2020 through collaborations with the GCAC and Teatro Vivo in Austin, Texas.

This performance of “Conjunto Blues” is made possible through the generous sponsorship of AARP. 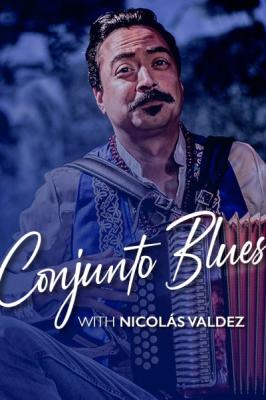