“Bosque Redondo: A Place of Suffering…A Place of Survival” is open to the public; Grand Opening postponed until May 2022


New Mexico Historic Sites announces the public opening of the permanent exhibit “Bosque Redondo: A Place of Suffering…A Place of Survival” at Bosque Redondo Memorial/Fort Sumner Historic Site. In an effort to ensure that all international and tribal partners can travel to the site and participate, the Grand Opening celebration, originally scheduled for October 9, 2021, has been rescheduled for May 28, 2022.  The site has been welcoming visitors to experience the new exhibit since a soft opening on July 1.

“Why don’t you tell our story?” asked a letter left at the Fort Sumner Historic Site Navajo Traveler Shrine in the summer of 1990. The question came from 17 visiting Navajo (Diné) students who felt their ancestral trauma had been erased from the historical record, requesting that the true history of the Navajo Long Walk be told through the site’s interpretation.

The Navajo Long Walk took place between 1863 and 1868 when the U.S. government forced the relocation of Navajo and Mescalero Apache peoples from their homeland in present-day Arizona to eastern New Mexico, across more than 300 miles. Over those five years, about 9,500 Navajo (Diné) and 500 Mescalero Apache (Ndé) were tortured and imprisoned by the U.S. military on the Bosque Redondo Reservation.

Designed through a partnership with the Navajo Nation and the Mescalero Apache Tribe, “A Place of Suffering…A Place of Survival” features for the first time voices from the communities most affected by the Navajo Long Walk in the form of oral histories (in English, Diné, and Ndé), contemporary quotes, and imagery to explain what life was like before, during, and after the Bosque Redondo Indian Reservation system.

The exhibit uniquely incorporates the outside world to the inside gallery through the use of skylights and fiberoptic light bundles. There are more than 10,000 light bundles, illuminated by natural light, each one representing a Diné or Ndé individual who was forced to march to the Bosque Redondo Indian Reservation.

The exhibition also features state-of-the-art digital interactives including a Treaty of 1868 touchscreen to allow visitors to hear each page in the Diné language or explore how each article affected the Diné later in life, and another interactive that features a reflection touchscreen to engage audiences and to create a space where community feedback is directly included in the exhibition. 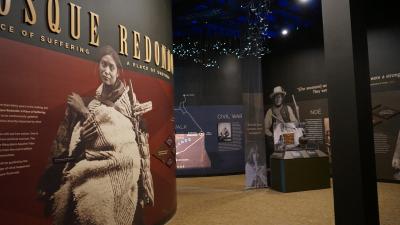