This sea scorpion fossil is a new and surprising addition to New Mexico’s fossil record. The fossil was found in 305-million-year-old rocks in the Manzano Mountains near Albuquerque. The fossil consists primarily of the telson (tail) of the sea scorpion. The new sea scorpion species, Hibbertopterus lamsdelli, was named for paleontologist James Lamsdell, of West Virginia University, a well-known expert on fossil sea scorpions. The name is pronounced “hibb-urt-OP-ter-us lams-dell-eye.”

Hibbertopterus lamsdelli belongs to a group of bizarre sea scorpions, the hibbertopterids, that reached lengths of over 6 feet. The New Mexico fossil represents a sea scorpion about 4 feet long. Hibbertopterids were heavily built “sweep-feeders” that used specialized spines on their legs to stir muddy sediment in search of small invertebrate food items.

The New Mexican fossil is only the fourth fossil discovered of an American hibbertopterid.Hibbertopterid fossils are also known from Europe and South Africa. Sea scorpions went extinct about 252 million years ago at the end of the Permian Period.

This fossil is part of the collection of the New Mexico Museum of Natural History and Science and will go on view at the museum in the coming months. Curator Dr. Spencer Lucas expressed his excitement about the new discovery, “Another amazing and unexpected fossil find in New Mexico, which reminds us just how many new fossils are out there in the State, awaiting discovery.” 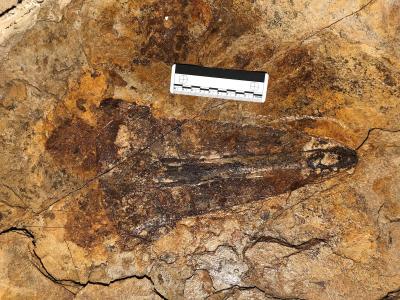 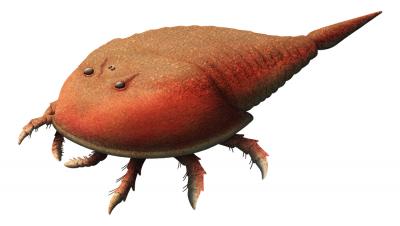