Santa Fe, NM - A new exhibition at the New Mexico Museum of Art surveys how modern artists brought new ideas to the American Southwest and drew upon the region for inspiration. "Western Eyes: 20th Century Art Here and Now" explores how artists as diverse as T.C Cannon, Georgia O’Keeffe, Fritz Scholder, and John Sloan responded to the distinctive cultures and environment of the Southwest with styles informed by national and international trends. The exhibition also highlights the museum’s role in fostering these developments in New Mexico. On view March 12, 2022 through January 8, 2023.

“With the exciting opening of the New Mexico Museum of Art Vladem Contemporary just on the horizon, this is an opportune time to look back at the way the New Mexico Museum of Art has engaged national and international narratives of contemporary art over the past century, and look at how artists working in this region have responded to international movements,” says Christian Waguespack, curator of 20th Century Art. “This exhibition can be seen as a prologue for what will happen at the Vladem, surveying over a century of artistic innovation that culminated in our current contemporary art scene in New Mexico.”

The late nineteenth and early twentieth centuries saw a dramatic increase in travel to the Southwest. Tourists and artists new to the region were drawn to Indigenous ceremonies and native material culture. Puebloan pottery and Spanish "bultos" and "retablos" inspired modernists working in New Mexico. The added influence of artists like Sloan and O’Keeffe yielded an exchange of fresh artistic and social ideas that produced New Mexico’s distinctive and powerful artistic identity.

"Western Eyes" chronicles this dialogue between regional, national, and international influences across the twentieth century. The exhibition includes work produced by New Mexicans for the various federal projects under Franklin Delano Roosevelt’s New Deal in the 1930s. Though New Deal artists focused on local culture to foster a cohesive American identity, many were heavily influenced by Mexican modernists such as Diego Rivera, a connection explored in the exhibition.

At roughly the same time, several parallel and rich traditions of abstraction emerged, drawn from various international movements in the arts. The art colony in Taos, the University of New Mexico, and the Institute of American Indian Arts (IAIA) became fertile ground for various modernist experiments. "Western Eyes" traces these developments at mid-century through the work of Transcendental Painting Group artists such as Raymond Jonson and Agnes Pelton or that of a later generation of modernists, which included Elaine de Kooning and Richard Diebenkorn as well as T.C. Cannon and Fritz Scholder, both of whom were at IAIA and employed abstraction to challenge existing representational norms for Indigenous peoples.

"Western Eyes" opens on Saturday, March 12, and curator Christian Waguespack will offer a public lecture on the exhibition on March 25th at 5:00 p.m. The lecture will be followed by a free public reception hosted by the Women’s Board of the Museum of New Mexico. 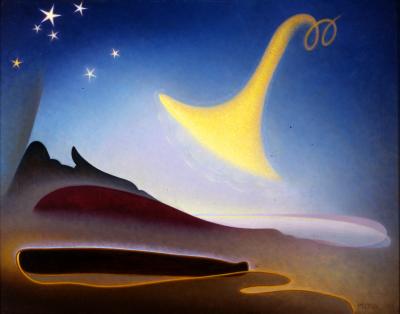