Alamogordo, NM - The New Mexico Museum of Space History (NMMSH), a division of the New Mexico Department of Cultural Affairs (NMDCA), and New Mexico State University – Alamogordo (NMSU) have completed the ownership transfer of the Clyde W. Tombaugh Science Education Center from the university to the museum.

The transfer of ownership between the two organizations took place on January 24th following review and approval by NM Higher Education Department (NMHED) and final approval by the University’s Board of Regents and the NMDCA. NMDCA and NMHED share a renewed working relationship that promises a long-term commitment to their mutual goals of serving and educating New Mexico’s youth.

The Tombaugh Center, previously known as the Tombaugh Building and IMAX theater, began as a partnership in the early 1980s, when the property belonged to NMMSH and the building belonged to the university. At the time, NMSU used the classrooms and office space, while the museum operated the theater and planetarium inside.

Over the years, the university had fewer needs for the classrooms and offices as their campus grew, while the museum’s education programs and staff expanded. The museum and the university began the conversation about ownership transfer between the two state agencies about three years ago.

Museum Director Chris Orwoll commented, “I’m very happy to say that what grew out of an initial meeting to discuss possibilities became a relationship of mutual trust and support between the museum and university, resulting in this very positive outcome.”

One of the most exciting aspects of the change is for the museum’s Education Department, which now has the use of a complete laboratory classroom for in-house education programs and summer camps. Three full classrooms are now in use in the building, along with additional office space and storage.

“We’re very excited to be able to offer the laboratory demonstrations as part of our educational experience,” said Orwoll, adding that, “it allows us to integrate new programs into our already extensive list of STEM based classes for schools to take advantage of when they come to visit us.” 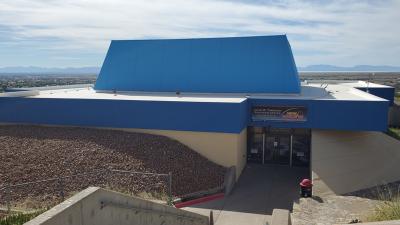