The New Mexico Farm & Ranch Heritage Museum in Las Cruces pays tribute to women making a difference in New Mexico agriculture with a rotating wall display in the central corridor.

The exhibit is called “Her Land: Women in Agriculture” and the new featured exemplar is 21-year-old Sophia Moreno of La Union, N.M.

Sophia grew up on a small, family farm along with her parents, Fred and Sharon, and younger sisters Monique and Nadette. They raise mostly meat, milk, and fiber-producing livestock, as well as horses. Sophia has served as both the Southern New Mexico Fair Rodeo Queen and Miss Rodeo New Mexico Teen.

An ambassador for the sport of rodeo, Sophia and her sisters also participated in 4-H, including horse shows, barrel races, ranch riding events, shooting sports, horse judging, wildlife, hippology, and parliamentary procedure. She received a horse judging scholarship to Clarendon, College in Clarendon, Texas. She is currently in the Ranch and Feedlot Operations program there and will earn an Associates Degree in Animal Science.

Sophia’s plans include becoming a veterinarian specializing in equine and bovine reproduction. She also wants to have a family, which she hopes to raise on her own ranch someday, passing along the skills, knowledge, and traditions that she gained through the first chapter of her life.

The exhibit will be changed about every six months to feature a different woman involved in New Mexico agriculture.

“Museums typically focus on the stories of our ancestors and their incredible accomplishments,” said Museum Executive Director Heather Reed. “We often forget to look around to see that history is unfolding right in front of us within our communities and our state. Her Land spotlights the amazing feats and contributions of modern-day women and showcases the young women working on the future of agriculture. This ongoing project will rotate every few months and will allow us to record history in real time for generations to come.”

The first person featured in the exhibit was Felicia Thal, a longtime rancher in northeastern New Mexico who passed away last year at the age of 92. 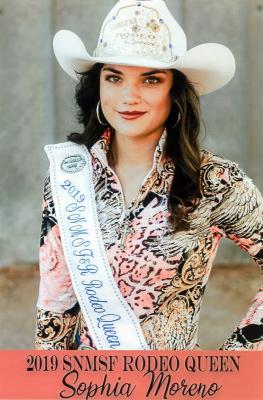