Albuquerque, NM - A paleontologist from the New Mexico Museum of Natural History & Science (NMMNHS) assisted with research on the brain development of mammals that has appeared in one of the world’s most prestigious academic journals.

A new study from the University of Edinburgh that was co-authored by Dr. Thomas Williamson, Curator of Paleontology at NMMNHS, shows that for the first 10 million years after dinosaurs died out, mammals prioritized boosting their body size to adapt to radical shifts in the make-up of Earth’s animal kingdom. The findings were published in the journal Science.

“Collecting and CT scanning many of the beautiful fossil skulls has led to this new understanding of what these bizarre animals were like and the evolution of the mammalian brain” Williamson said.

Research findings show that the size of mammals’ brains, compared with their body weight, decreased following a catastrophic asteroid impact 66 million years ago that ended the reign of dinosaurs. It had been widely thought that mammals’ relative brain sizes generally increased over time in the wake of the wipeout.

While much is known about the evolution of the brains of modern-day mammals, it has been – until now – unclear how they developed in the first few million years following the mass extinction.

A team from the University of Edinburgh has shed light on the mystery by performing CT scans on newly discovered fossils from the 10-million-year period after the extinction, called the Paleocene.

The badlands of northwestern New Mexico are among the few places where scientists can find complete skulls and skeletons of the mammals that lived immediately after the mass extinction of dinosaurs.

Their findings reveal that the relative brain sizes of mammals at first decreased because their body size increased at a much faster rate. Results of scans also suggest the animals relied heavily on their sense of smell, and that their vision and other senses were less well developed. This suggests it was initially more important to be big than highly intelligent in order to survive in the post-dinosaur era, the team says.

Around 10 million years later, early members of modern mammal groups such as primates began to develop larger brains and a more complex range of senses and motor skills. This would have improved their survival chances at a time when competition for resources was far greater, the team says.

The study was supported by Marie Skłodowska-Curie Actions, European Research Council, Leverhulme Trust and National Science Foundation. It also involved New Mexico Museum of Natural History and Science in the US and several international institutions. 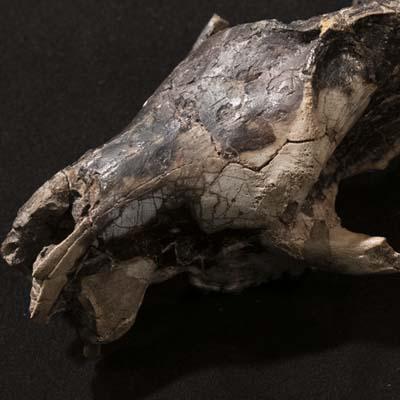