Albuquerque, NM - On April 16, the 50th anniversary of the Apollo 16 mission’s launch, the New Mexico Museum of Natural History & Science (NMMNHS) will remember the past of human space exploration, while also looking to the future with the new mission to return people to the moon. The four-hour event, which runs from 11 a.m. to 3 p.m., will include unique and fun educational opportunities and the premiere of a planetarium show.

Visitors to the museum during the event can walk on the moon … or at least pretend to! A 40’ X 20’ moon map, which was part of the 2019 Apollo 50th anniversary celebration in Washington DC, will be available to walk on in the museum’s atrium. This detailed geological map names all the lunar craters and other surface features, along with marking the landing spots of all Apollo missions. It is a vinyl, so only socks can be worn for this lunar stroll.

Visitors will have a chance to learn all about the new mission to return people to the moon, known as Artemis. Several videos, puzzle sheets, and other table activities will describe different features of the program in entertaining and educational ways.

The main event will be the noon premiere of a new planetarium show about Artemis called Forward to the Moon. Kari Byron from Crash Test World and MythBusters launches us on a journey beyond the Earth towards a sustainable future in space. NASA’s 21st-century Artemis program, named for the Greek goddess of the moon and twin of Apollo, is the next step in our endeavor to explore the universe and land the first woman and person of color on the surface of the moon. The planetarium feature is produced by Fiske Planetarium in collaboration with TEND Studio with funding from NASA SSERVI and Lockheed Martin.

“Our return to the moon begins in the next few weeks with the launch of the first test mission, Artemis 1,” said Jim Greenhouse, the museum’s space science director. “We look forward to seeing human footprints on the lunar surface again just a couple of years from now and sharing that excitement with all New Mexicans.”

Everything that day is included in regular museum and planetarium admission, making this a prime day to visit the museum! While you’re there, check out the temporary exhibition Dogs, A Science Tail, which offers a thrilling new interactive experience highlighting the dynamic bond between humans and dogs.

For more details on the event, other exhibits, and admission times and prices, visit www.nmnaturalhistory.org. 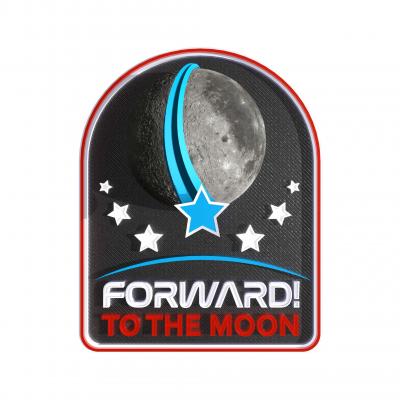 "Forward! To the Moon" Logo