Santa Fe, New Mexico – The village of Magdalena will come together for an afternoon of merriment, down home music, and museum fun in support of its library on Saturday, May 7.

Beginning at noon at the Magdalena Public Library, visitors can enjoy a world of music inside Wonders on Wheels (WoW) – the New Mexico Department of Cultural Affairs (NMDCA) 38-foot RV that brings New Mexico music from Santa Fe’s Museum of International Folk Art to the state’s communities. Step inside WoW and touch actual instruments and costumes from the museum’s “İMúsica Buena! Celebrating Music in New Mexico!” The exhibit celebrates and explores aspects of New Mexico’s traditional music.

Heidi Heidgerken, NMDCA educator and WoW driver, says she’s excited to help support the Magdalena Library. “It inspires me to see the expressions of wonder and curiosity on the faces of learners of all ages as they explore the ‘İMúsica Buena! Celebrating Music in New Mexico!’ exhibit. The exhibit gives visitors a taste of the larger exhibition at the Museum of International Folk Art that features traditional musical objects like cigar box guitars crafted by co-curator Cipriano Vigil.

WoW travels to communities throughout the state with an exhibit from one of New Mexico’s state museums on board a 38-foot RV. Next month WoW will visit Carlsbad and offer the people there the chance to step into the Música Buena exhibit.

Also featured at the May 7 Magdalena Cowboy Cookout is free food! Volunteers will be flipping burgers and hotdogs on the grill, while Tuesdays@2 will serenade the crowd with their special blend of old-timey, folk, pop, country, and Norteño live music. Last but not least, visitors can take home a genuine craft stick harmonica they’ll be able to make at the event.

Magdalena’s classic Boxcar Museum (created from an actual Atchison, Topeka & Santa Fe railroad car) will also be opened from noon to 3 pm, where items reminiscent of the village’s 19th and early 20th century mining heritage are on display. 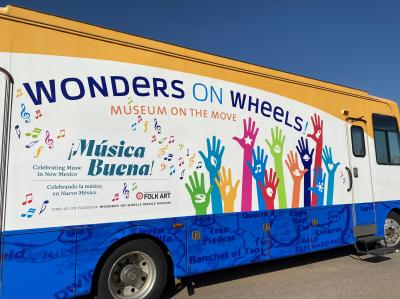