Creative Spark: The Life and Art of Tony Da


Creative Spark: The Life and Art of Tony Da

(Santa Fe, NM – February 3, 2011)—Creative Spark: The Life and Art of Tony Da is the artist’s first comprehensive museum retrospective. On view will be the largest group of Da’s paintings and pottery ever gathered in one place.  Spanning the 1950s to the 1980s, the exhibit includes rarely seen paintings and pottery, from public and private collections, ranging from red, black and polychromatic jars and plates to bears and turtles. In his fifteen years as an artist, Tony Da (pronounced day) catapulted Pueblo pottery into the heights of contemporary art. Growing up with a celebrated father and grandparents – Popovi Da and Julian and Maria Martinez, one can see why. The exhibition reveals a seamless thread from grandparents to parent to son.

The exhibition opens at the Museum of Indian Arts and Culture on February 13, 2011 running through December 31, 2011.

Museum Director Shelby Tisdale said; “We are honored to present this groundbreaking exhibition at the Museum of Indian Arts and Culture. Tony Da's bold innovations have inspired so many young artists today. Tony took Native American art to new heights and his legacy lives on.”

The genetic thread began with Da’s grandparents on San Ildefonso Pueblo north of Santa Fe. Here, Edgar Lee Hewett, founding director of the Museum of New Mexico, and an archaeologist by training, asked potter Maria Martinez to use sherds he had excavated in 1909 as patterns for full-scale examples of polychrome pottery. In their experiments, Maria and her husband Julian almost by accident discovered a way to create a black-on-black matte finish. With Maria shaping the pieces and Julian painting them, Native American art took a direction leading it into the world of fine art.

In the 1940s and ‘50s, their son, Popovi Da innovated by adding bits of heishi and turquoise to the pots; perfecting a gunmetal finish; reviving polychrome pottery; and, scratching designs into the surface after firing – called sgraffito. He also built a shop on the Pueblo and displayed the family’s works not on Indian rugs as most traders did, but on glass shelves befitting their growing status as fine art.

Descended from such a creative lineage, Tony revealed his own artistic bent as a child – as a painter not a potter. At Santa Fe High School he was trained by Joseph Bakos, one of Los Cincos Pintores, the founders of the Santa Fe Art Colony. Later at Western New Mexico University in Silver City, ancient Mimbres designs caught his eye. At other times he explored the traditional, interspersing with the abstract, realistic and semi-realistic. It was during the six years that he lived with his grandmother, Maria, in the late 1960s, that he started making pottery.

His artistic skill in ceramics developed rapidly and in 1967, Tony began to work on his sculptures, creating an exciting new form of Pueblo ceramic art.  These sculptures included turtles, owls, and bears. In 1968, his entries into the Gallup Inter-Tribal Indian Ceremonial flew so far beyond the work of his contemporaries that the judges created special awards to honor them.

Da soon surpassed his father’s ground-breaking experiments in pottery. Where Popovi had added a gem to cover a flaw, Tony made them his intent, adding turquoise, mother-of-pearl, even silver. He brought his painter’s hand to the intricacy of sgraffito. He dabbled with the firing process, even introducing the blow torch as a potter’s tool.

“Everyone picked up on what he was doing,” said Richard Spivey, co-author with Charles King of a book being published in conjunction with the exhibition. “He was always doing something different. He was the first one to really break from tradition. It was a lot for people to accept at first, but very quickly it became sensational.”

Shelby Tisdale, the exhibition’s co-curator with Antonio Chavarria, said it’s especially significant to include Da’s paintings in the exhibition – an overlooked part of his artistic legacy.

“He’s in the cohort with Helen Hardin. He’s learning from T.C. Cannon and Fritz Scholder, and incorporating a lot of these different ideas,” Tisdale said. “In some, you can see where he’s really experimenting with the layers. It’s a technique that he and Helen started working with. You get a sense of that whole generation of Indian artists who took their work to new heights of innovation and appreciation in the world of fine art.”

A consummate perfectionist Da isolated himself in his studio for long periods of time and while the output may have been prodigious the  amount of work he allowed out of the studio was scant. That the exhibition Creative Spark has managed to collect 22 paintings and 45 pots speaks to the limitations of perfection in a short career.

The first book dedicated to Tony Da’s life and work, written by Charles King, owner of King Galleries in Scottsdale and Richard L. Spivey, author of The Legacy of Maria Poveka Martinez, will be available, in conjunction with the exhibition, in August 2011. 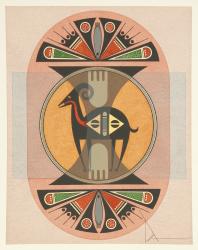 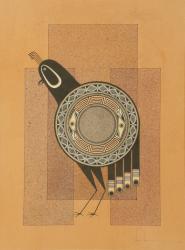 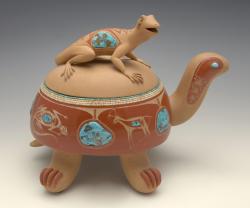 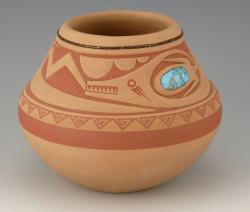 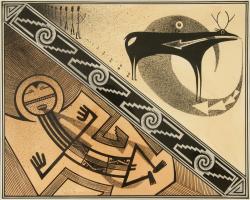 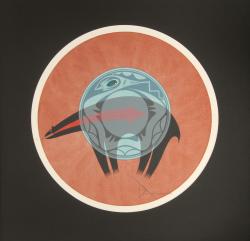 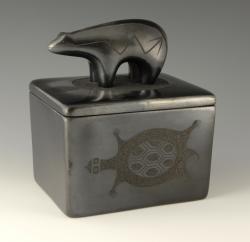 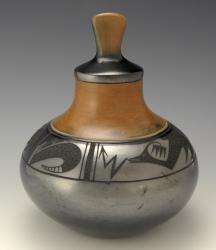 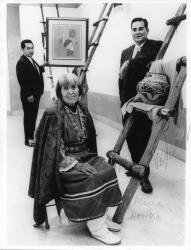 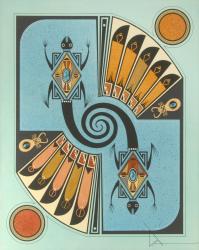