In recent months, NMHS has brought several new staff members on board throughout the state, many of them in southern New Mexico. NMHS plans to highlight and celebrate each of them in a series of releases leading up to Old Lincoln Days, which runs August 5-7.

Wilson brings a wide range of experience to his new role. He received a BA in History from the University of New Mexico, and in 2014, he went on to complete an MA in Museum Studies at the University of Kansas. Previously, he served as park historian at Kleb Woods Nature Preserve and Cypress Top Historic Park in Houston, Texas. He also worked as a historic interpreter at Confederate Reunion Grounds State Historic Site near Mexia, Texas, the Meeteetse Museums in Meeteetse, Wyoming, and the Mahaffie Stage Station near Kansas City.

Wilson has also volunteered extensively. He spent many years working on public lands restoration projects in New Mexico, served as a park guide for the National Park Service, and worked as an archival assistant at the Harry S. Truman Library and Museum in Missouri.

“Fort Stanton has so much potential,” Wilson said. “What attracted me most to this position are the vast and diverse histories Fort Stanton provides in terms of interpretation, exhibits and public programming.”

In his personal life, Wilson has a special interest in mid-century modern architecture and the end of the age of modernism. 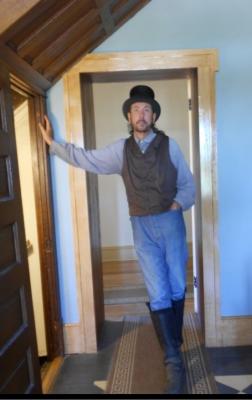