What’s New in New: Recent Acquisitions is the Museum of Indian Arts and Culture’s annual exhibition of new acquisitions celebrating the gallery’s namesake, Lloyd Kiva New. What’s New in New opens on Sunday, February 17, 2013 from 1 to 4 p.m. and runs through December 30, 2013. The Women’s Board of the Museum of New Mexico will serve refreshments in honor of Kiva New’s birthday anniversary.

Curator Tony Chavarria’s focus with this show is on modern and contemporary Native art including paintings, monotypes, poetry, and sculpture created between 1968 and 2012. Approximately 35 works will be featured representing artists such as Samuel Manymules, Marla Allison, David Bradley, Ambrose Atencio, Ross Chaney, and Fritz Scholder. This exhibit highlights new additions to the MIAC/LAB collections from recent years, many given through generous donations and bequests.

The opening on Sunday February 17, from 1 to 4 p.m., will include an artist demonstration, the kick-off talk to a stimularing artists’ speaker series, a performance by a Pueblo dance group, and the always popular all-ages hands-on activities in the classroom.

1 to 4 p.m.   Diné weaving demonstration by Roy Kady in the Blommer Gallery

1 to 4 p.m.  All-ages hands-on activities in the classroom

Artists Linda Lomahaftewa and Marla Allison kick-off the speaker series at 2 p.m. the day of the opening.

Linda Lomahaftewa (Hopi/Choctaw) is a Faculty Member in the Studio Arts Department at IAIA. She was also in the first graduating class. Lomahaftewa, an accomplished painter and print maker went on to earn her B.F.A. and M.F.A. degrees in painting from the San Francisco Art Institute. Over the past thirty-five years, Lomahaftewa has received numerous awards for excellence in painting and printmaking. Her works are also represented in more than ten significant public collections, some of which include the American Indian Historical Society, San Francisco, California, Center for Arts of Indian America, Washington, D. C., University of Lethbridge, Native Studies Department, Alberta, Canada, the City of Phoenix, and the Native American Art Collection, Phoenix, Arizona. Lomahaftewa is also an influential teacher and arts educator.

Marla Allison is a member of Laguna Pueblo in New Mexico. She is a contemporary Native artist whose primary medium is painting and both lives and makes art from her home studio where she finds comfort and inspiration by connecting with family, tradition, and being close to her community. Since graduating from IAIA, Allison has exhibited at the Heard Museum Indian Fair and Market, the Santa Fe Indian Market, and the Smithsonian Native Art Market in New York. Permanent collections with her include the Heard Museum Permanent Collection, the Museum of Indian Arts and Culture , the Red Cloud Indian School Collections, and various private collections. Recently Allison received the Eric and Barbara Dobkin Native Woman's Fellowship at the School for Advanced Research (S.A.R.) in Santa Fe, NM, finishing her fellowship in June of 2010.

The artists’ speaker series will continue on Sunday, March 17, Sunday, April 14, and conclude on Sunday, May 5.  All talks begin at 2 p.m. in the MIAC O’Keeffe Theater.  Talks are free. Seating is limited.

Ernest and Veronica Benally are both Diné (Navajo) jewelers. Ernest works with both silver and gold, and loves lapidary work. He is best known for his imaginative mosaic inlay work. Veronica approaches her jewelry designs with a motherly perspective, deeply rooted in her respect for her own family and culture. Her designs gleefully experiment with color combinations and materials, including gemstones and sterling, creating a unique, contemporary style of Native American jewelry.

Ernest and Veronica have won many awards: Best of Show at the Intertribal Marketplace of the Southwest Museum in Los Angeles; first place in the jewelry class at the Heard Museum Guild Indian Fair and Market in Phoenix; Best of Show by the Southwest Indian Art Award of Excellence; and first and second place in the Santa Fe Indian Market Bracelet and Necklace divisions. They are easily counted among the best Navajo jewelers.

Naranjo is a contemporary Tewa potter from the Pueblo best known for its potters, Santa Clara. Her grandmother, mother, and aunts, are all world-renowned for their pottery. Naranjo’s work blends contemporary images carved with an Exacto knife onto traditionally-made pottery. Her whimsical designs of women, which she calls "pueblo girls," and animals, are common themes in her work. She won best in show at the 2007 Eiteljorg's Indian Market and participates in the Santa Fe Indian Market, winning first prize in pottery at the 2011 Market. Naranjo was also an artist-in-residence at the Eiteljorg Museum of American Indians and Western Art.

What’s New in New: Recent Acquisitions opening and exhibit also celebrates 20 years of the FRIENDS OF INDIAN ART’s newly dedicated Exhibit Display Case. This case features selected Native works of art purchased by the Friends group over the years for the Museum of Indian Arts and Culture’s collection.  Additional FRIENDS OF INDIAN ART purchases are on display throughout the museum and are noted as such.

FRIENDS OF INDIAN ART have planned an exciting 2013 events calendar. For more information visit the Museum of Indian Arts and Culture web site at http://www.indianartsandculture.org

or the Museum of New Mexico Foundation web site http://www.museumfoundation.org. 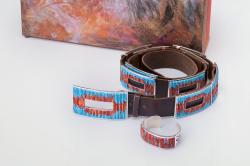 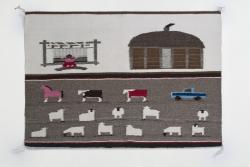 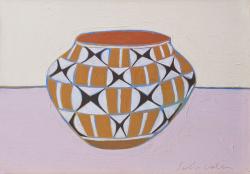