El Palacio magazine celebrated its centennial in November 2013, joining a small but august group of publications in print still today; Scientific American (1845), Harper’s (1850), The Atlantic (1857), and National Geographic (1899). Setting El Palacio apart is its distinction of being the oldest museum magazine of its kind in the United States, first published by the Museum of New Mexico in November 1913.

Museum of New Mexico founder Edgar Lee Hewett’s (1865-1946) intent with El Palacio’s easy-to-read articles was to promote both the museum and the School of American Archaeology (which he also headed) to patrons and sponsors. Articles ranged from the gossipy to the scholarly—tales of leisure trips abroad by Santa Fe’s A-list families and their sightings at exhibition openings were balanced by findings from archaeological trips to various continents. Today the magazine remains known for its articles of as much interest to the layperson as they are to the scholar with curators, scholars, and scientists contributing—the gossip now the purview of other media outlets. 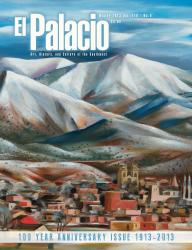