Dr. Jon Hunner, a history professor at New Mexico State University, will serve as interim director at the New Mexico History Museum/Palace of the Governors, starting in early May after the spring semester. Hunner will be on loan from NMSU through December 2014. Dr. Frances Levine, the museum’s current director, is taking over leadership of the Missouri History Museum in St. Louis. Her last day is Sunday, March 16, the closing day of the exhibition Cowboys Real and Imagined.

“We are grateful to Governor Garrey Carruthers and New Mexico State University for their generosity in sharing Dr. Hunner, who has shown lifelong dedication to public history and a commitment to education,” said Veronica N. Gonzales, Cabinet Secretary, New Mexico Department of Cultural Affairs. “The Museum of New Mexico Board of Regents has already formalized the search committee and a national search will be conducted.”

Hunner is a longtime historian of New Mexico and the Atomic West. From 2004–2008, he served as a consultant on the development of the New Mexico History Museum, helping to review the text for its main exhibit, Telling New Mexico: Stories from Then and Now, and contributimg two chapters to the award-winning book, Telling New Mexico: A New History. Before embarking on a career in academia, he worked in Santa Fe as an independent art handler and as an exhibition preparator for the Museum of Fine Arts.

Hunner has lived in New Mexico most of his life and earned his B.A. from St. John’s College in Santa Fe and his M.A. and Ph.D. from the University of New Mexico. Since 1995, he has lived in Las Cruces with his wife, Mary Ellen, where they raised their son, Harley. While at NMSU, Hunner has taught graduate and undergraduate courses on United States, New Mexican, and public history. His numerous publications include Inventing Los Alamos: The Growth of an Atomic Community (University of Oklahoma Press, 2004), and Dr. J. Robert Oppenheimer, the Cold War, and the Atomic West (University of Oklahoma Press, 2009).

“As a New Mexican historian and someone who for years has made the past accessible to the public, I look forward to working with the dedicated staff at the museum and with Secretary Gonzales and the Department of Cultural Affairs to preserve, interpret, and present the histories and heritages of the peoples of New Mexico,” Hunner said. “Dr. Levine’s tenure as director has left the state with a rich legacy in opening the History Museum in 2009, in the wonderful exhibits that have filled the museum and the Palace, and in her engagement with New Mexicans to celebrate our past. I look forward to continue her work and her commitment to our state’s heritage.”

Hunner helped develop NMSU’s Senator Domenici Legacy Project, co-chairing the program committees for its 2008 and 2009 conferences and editing a book that came from the 2008 event. His considerable community involvement includes: Board of Advisors for the Taylor/Barela/Reynolds/Mesilla Historic Site; New Mexico Centennial State Task Force; and Bridging Ages: An International Organization for Time Travels and Historic Environment Education, where he collaborated with international professors and museum professionals to do living history, exchange methods in museum and historical education, and experience New Mexico.

A successful grant recipient, Hunner’s work reaches across the rich history of the Mesilla Valley to the Manhattan Project, endangered historic places, and the counter-culture’s impact on America. He won a Senior Fulbright Fellowship in 2001 to assist Sweden’s Växjö University in developing their public history and American studies programs.

“I am pleased to hand the reins to Dr. Hunner, who is a skilled administrator and a historian with a commitment to make history accessible to the public,” Levine said. “I will work with Jon for a smooth transition and be available to him as a resource throughout this period.”

NMSU President Garrey Carruthers said, “I’ve worked with Jon before and think extremely highly of him. He is an outstanding historian, and I am certain he will do a wonderful job serving the state at the post.”

Set in the heart of the Santa Fe Plaza, the New Mexico History Museum opened in 2009 as a 96,000-square-foot addition to the Palace of the Governors National Historic Landmark. Since then, more than 500,000 visitors have enjoyed long-term and changing exhibits that explore the Southwestern experiences of the American story. Vibrant lectures, hands-on workshops and performances complement the museum experience. The museum’s campus includes the Palace Press, Native American Artisans Program, Fray Angélico Chávez History Library and Palace of the Governors Photo Archives.

The Department of Cultural Affairs is New Mexico’s cultural steward and is charged with preserving and showcasing the state’s cultural riches. With its eight museums, eight historic sites, arts, archaeology, historic preservation and library programs, the department is one of the largest and most diverse state cultural agencies in the nation. Together, its facilities, programs, and services support a $3.3 billion cultural industry in New Mexico.

Download a high-resolution image of Dr. Hunner by clicking on "Go to related media" at the upper left of this page. 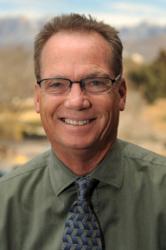