Wooden Menagerie: Made in New Mexico


One of the most far-reaching exhibits of New Mexico animal wood carvings, Wooden Menagerie: Made in New Mexico, debuts at the Museum of International Folk Art on April 6, 2014 with 107 artworks made by such masters as Felipe Archuleta, Patrociñio Barela, and José Dolores López. The exhibition runs through February 15, 2015.

The artworks range from narrative-to-abstracted in style, and include birds, reptiles, fish, cattle, an alligator that is almost smiling, and a whimsical blue deer. These mixed-media carvings were created from elm and cottonwood along with glass marbles, leftover yellow paint from painting highway lines (utilized by Archuleta for a cheetah), broom bristles, dog hair (it is said that Archuleta would befriend stray dogs if he needed hair for, perhaps, a bear carving), rope, metal, leather, nails, sawdust, and wood shavings. Animal woodcarving is an Hispano tradition going back to the 1700s in New Mexico.

The exhibit is divided into several sections. The early-to-mid 1900s “Heritage” focuses on the works of Celso Gallegos, Jóse Dolores López, and famed modernist Patrociñio Barela. According to MOIFA guest curator Andrew John Cecil, who has been working on this show for almost a year, “Barela was the first Hispano woodcarver lionized by the contemporary art world.” Barela not only portrayed animals with human qualities, but sometimes the humans exhibited animal-like qualities, as in his carving of a man pulling an ox cart, thus becoming a beast of burden himself. A Luis Tapia artwork entitled El Gallo similarly explores how our human identity is connected to animals in its portrayal of a male singer with a rooster’s tail.

The section "A Miracle from God: Felipe Archuleta,” is the central segment of the exhibition, with 48 pieces from Archuleta and his workshop, including pieces worked on by his son, Leroy Archuleta and his grandson Ron Archuleta Rodríguez, who began working at the workshop when he was eight years old. Beginning with sheep, burros, oxen, and pigs observed from daily life, Archuleta’s animal carvings drew on his rural New Mexican heritage to communicate a sense of how humanity connects with animals. As global media arose in the 20th century, Archuleta gained a larger worldview through television, magazines and children’s books. He began portraying more exotic animals such as giraffes, elephants, and tigers. His workshop in Tesuque, called La Escuela, was a hotbed for other woodcarvers in the 1970s, ‘80s, and ‘90s, including Alonzo Jiménez and David Alvarez. During the late 1980’s, “Santa Fe Style” became a cultural phenomenon and the animal carvers were “right in the thick of it" says Cecil. By 1991, Archuleta’s work had been shown in Paris, New York, LA, and Tokyo. This was the peak period for recognition of this work on the international art stage.

The show places these sculptures in a larger international context. Archuleta’s work has appeared at numerous museums including the Smithsonian Institution, Museum of American Folk Art in New York, and Milwaukee Museum of Art, while Barela’s woodcarvings were featured at the Museum of Modern Art in New York in the 1930s and Jim Davila’s carved Technicolor rattlesnake appeared on the cover of Rolling Stone in the 1980s held by actor Jack Nicholson.

Contemporary woodworkers who will be spotlighted in the show include Gloria López Córdova, Ron Archuleta Rodríguez, Arthur López and Luis Tapia. Cecil says of these works, “There is a sense of personification and the animism is really powerful in these works. The contemporary art world is always looking for pure expression. These artworks not only use animal imagery but are transforming it into new, innovative forms.”

Wooden Menagerie will be on view April 6, 2014 until February 15, 2015. There will be a free to the public opening reception on April 6 from 1 p.m. to 4 p.m. with artists Ron Archuleta Rodríguez, Jim Davila, and Luis Tapia in attendance. Public programs include a mask-making workshop, an artists’ panel with contemporary carvers, and a panel of national figures discussing the importance of New Mexican animal woodcarvings. Artworks featured in the show were obtained from the MOIFA collection, Spanish Colonial Art Museum collection, Albuquerque Museum, Roswell Museum and Art Center, and private collectors including Santa Fe Style author Christine Mather. 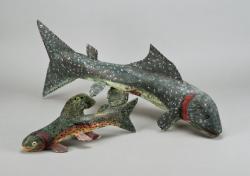 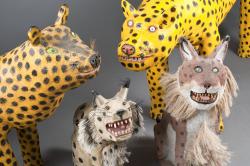 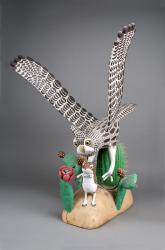 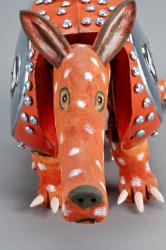 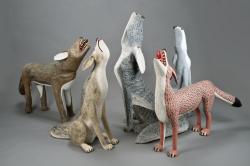