Painting the Divine: Images of Mary in the New World


An ecclesiastical wave of 1960s-era urban renewal inspired mission churches throughout the Americas to undergo drastic renovations and, all too often, cast off centuries-old artwork. Charles W. Collier, a cultural attaché to Bolivia, and his wife, Nina Perera Collier, began purchasing and obtaining pieces that eventually formed the backbone of the International Institute of Iberian Colonial Art, once based at their Los Luceros estate in northern New Mexico. In 2005, with the promised construction of spacious galleries and a state-of-the-art collections vault, the Institute donated 70 paintings and three sculptures to the then-unbuilt New Mexico History Museum. When Painting the Divine: Images of Mary in the New World opens on June 29, 35 of these 17th- and 18th-century masterpieces will share one exhibition space for the first time ever.

Painting the Divine includes works from Spain’s three colonial capitals: Cuzco, Peru; Mexico City; and Santa Fe. Together, they reveal how faith sustained Spanish colonists in harsh and remote frontiers and how their religious art evolved in those places. European paintings went to Peru, where local artists recreated them. Those works traveled to Mexico, where another school of religious art developed. Paintings from Mexico City journeyed up El Camino Real to adorn New Mexico mission churches and private homes. Once here, they inspired local artists who lacked canvas and oil paint and so used the materials available to them to create art—thereby developing into wholly new artists: the santeros, whose work thrives throughout the Southwest today.

“At the time the Colliers began the collection, museums, galleries and art historians didn’t pay much attention to these works,” he said. “They were considered stepchildren to fine European art. Now we know that they’re amazing, hybrid images that combine Old World with New World elements, from local people to textiles, flora, fauna, and new appearances of Mary in the Americas.”

The museum conserved 12 of the paintings. The cleaning, repairing and stabilizing accomplished by Denver-based art conservator Cynthia Lawrence is detailed in the exhibit through a video created by New Mexico Highlands University media arts students. Rounding out the exhibit are loans of colonial paintings from other owners, including St. Anthony’s Catholic Church in Pecos and Our Lady of Belen Catholic Church south of Albuquerque.

“The people who made these paintings were moved by their faith,” Díaz said. “Even though many of them were struggling to exist, they made these wonderful works of art. And they give us glimpses of New World settings. You see Native peoples in their traditional clothes appear. We see mountains typical of Potosí, Bolivia. We see parrots and turkeys. And we experience the love of freedom in form and color found in the baroque style that New World artists often took to the extreme, with canvases exploding in decorative details and layers of iconography.”

By choosing paintings that depict Mary, Díaz creates a focal point for the galvanizing role that religion played in colonists’ lives. The exhibit explores and defines her various images—from Our Lady of the Lote Tree (above; Melchor Pérez Holguín, 1716, Bolivia) to The Visitation (unknown artist, ca. 1750, Mexico) to the only known canvas painting by a New Mexico santero, Our Lady of the Lakes (José Aragón, ca. 1800).

Of note to Díaz is how the paintings illustrate the trade in fabrics throughout the Americas. “The textiles include lace from Flanders, brocade from Europe, fine silks from the Philippines.” Even today, devotees of La Conquistadora at St. Francis Basilica in Santa Fe bedeck her in fine fabrics. The exhibit includes one of her outfits made from 18th-century Chinese silk—itself an emblem of Mary’s appearance in worlds far from the studios of European masters.

Fresco Publishing is releasing a companion catalog to the exhibit authored by Díaz and Suzanne Stratton-Pruitt, a leading art historian specializing in the arts of South America. The book includes 34 images from the Collier Collection, along with the story of the Colliers, a renaissance couple whose keen eye saved these artworks for generations to come. Essayists in the book are Díaz, Stratton-Pruitt, Kelly Donahue-Wallace and Tey Marianna Nunn.

Cost: Free with admission; free to NM residents on Sundays, children 16 and under daily. 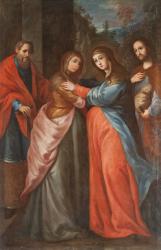 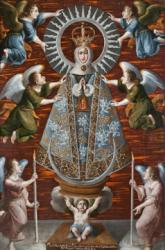 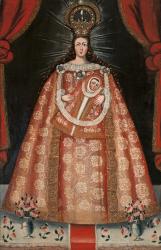 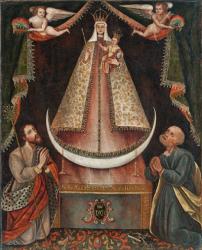 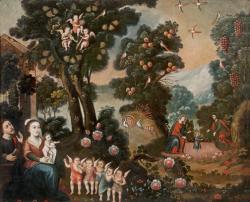 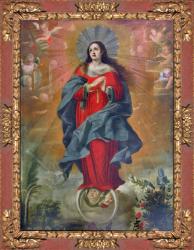