The New Mexico Museum of Art presents Alcove Shows 1917 – 1927 featuring sixty-one art works by twenty-four artists in the museum’s permanent collection.  The exhibition is on view Aug 8, 2014 through Feb 23, 2015 with the opening reception on Thu, Aug 28, 2014 from 5:00-7:00 p.m. (Please note the day change as the annual Zozobra event is being held on the museum’s usual Friday opening evening.)  Guest curator MaLin Wilson Powell looked back at the first 10 years of exhibitions at the Museum of Art to draw a small selection of works by artists who exhibited during that time

Exhibitions in the alcoves at the New Mexico Museum of Art date to its 1917 founding as the Art Gallery of the Museum of New Mexico and were part of the “Open Door” policy suggested by artist Robert Henri’s. Small one-person exhibitions were held in the gallery alcoves through the 1950s, resuming in the mid-1980s, and again in the early 1990s.  Many of the artists’ works in those early alcove exhibitions form the historical core of the museum’s collection.

During the museum’s first decade there were approximately three hundred alcove exhibitions. Some were paintings of the Southwest by Henri’s friends and colleagues who he persuaded to visit Santa Fe. On view as well were Native American pottery and weaving, Chimayo weavings, and shows of such diverse art and ethnographic materials as Chinese paintings, Japanese woodblock prints, Old Master etchings, Indonesian textiles, Pre-Columbian sculpture, Sioux ledger drawings, Aboriginal paintings, as well as art from Cornwall and New Zealand.

Alcove Shows 1917 – 1927 reflects as much as possible the first decade of alcove exhibitions.  Works by artists Ernest L. Blumenschein and William Penhallow Henderson who were in the museum’s November 24, 1917 inaugural exhibition will be on view. Both of these artists, like most of their peers, were trained in 19th century academic conventions, studied in Paris, and made their living as illustrators. Early works by Blumenschein and Henderson’s from Paris, Rome, New York, and Chicago, before they moved to New Mexico, are included.

“From the museum’s inception, artwork from around the world has been on view, a happy result of the sophisticated, disparate artists who were drawn to Santa Fe and Taos,” says guest curator MaLin Wilson-Powell. “New Mexico’s art during the early 20th-century was shaped by two primary artistic legacies - 19th-century Romantic genre paintings that present nature and indigenous cultures as pure, redemptive and mystical, and modernist abstraction that presents the sublimity of empty space.”

While the paintings of European-trained artists Blumenschein and Henderson became progressively more modern in New Mexico, with the outbreak of World War I, American artists no longer studied in Paris or visited Italy for inspiration. Instead, they opted to visit “faraway” New Mexico at the invitation of artist friends and colleagues. The better known were welcomed with free studio space at the Palace of the Governors and every one of took advantage of the museum’s unique exhibition policy. Many of these artists  Alcove Shows 1917 – 1927 featured artists John Sloan, Raymond Jonson, and Laura Gilpin among them, forged careers not tethered to 19th-century academicism.

This exhibition progresses from an introductory alcove featuring Native American pottery, to Japanese printmaking, to Modernism, with the other five galleries highlighting five artists – Ernest L. Blumenschein, William Penhallow Henderson, John Sloan, Raymond Jonson, and Laura Gilpin – along with work by family and close associates who stayed in New Mexico, who were changed by New Mexico, and who changed New Mexico’s art and culture in turn. 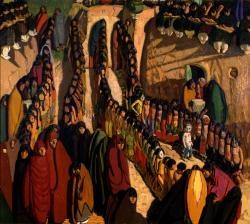 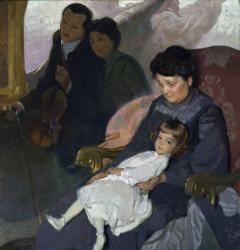 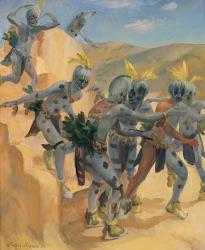 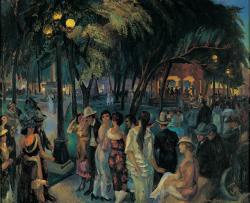 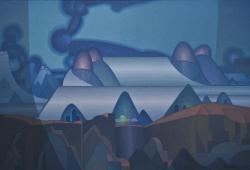 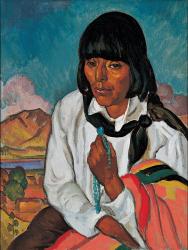